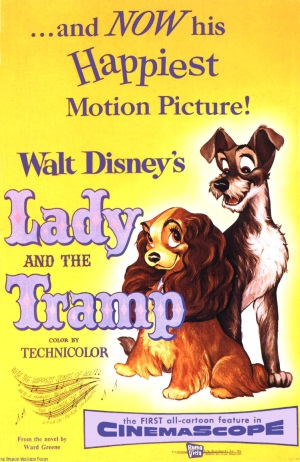 I only had the pleasure of watching many of the famous Disney classics for the first time last December and while I enjoyed almost all of them, Lady and the Tramp was one I absolutely fell in love with. One of the aspects which makes Lady and the Tramp great is its ability to pull off a love story not only free of cliches but also manages to feel fresh. Going into this movie I was concerned that it would the typical high-class girl falls in love with a low-class guy (well dogs in this case) but I was very pleasantly surprised. Both Lady and Tramp are believable characters but display subtle dog traits which I didn’t even notice the first time I watched the film. Perhaps the most humorous of these would be the fact the dogs in the film refer to Lady’s owners and “Jim Dear” and “Darling” as this is what the two call each other throughout the film. The little details like this warrant Lady and the Tramp as a film worthy of multiple viewings.

Lady and the Tramp was the first animated produced in CinemaScope and they sure took advantage of the new format. The whole movie is one big ignition of the senses; could a movie be more relaxing to watch than this? Just like Lady I don’t want this seemingly perfect world of early 1900’s Americana to be altered in any way; notice throughout the entire the film every day is filled bright sunshine and it only starts to rain when things hit their worst. The date sequence also surprised me greatly; having seen it parodied to death my entire life I didn’t think it would have anything to offer me; yet their entire date had me awe and left me breathless. The soundtrack also offers some of the most memorable compositions and songs in Disney history, perfectly capturing the essence of falling in love. Lady And The Tramp is an absolute heart melting charmer If I ever saw one and my personal favourite animated Disney film from Walt’s era.