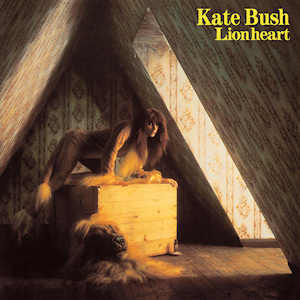 Lionheart is the underdog of Kate Bush’s work; usually dismissed as the inferior, rushed follow up to The Kick Inside. Pfft, what album are the people who say this listening to? Lionheart was released only nine months after The Kick Inside but you would never know it. The album is campy, theatrical and is the kookiest thing Bush has ever recorded but it doesn’t care who knows it. What do you expect from an album which has Kate dressed as a lion on the cover?

There’s not a track I dislike here and choosing a favourite is hard. Ultimately have to go with Kaskha from Baghdad, a song which creates such a visualisation in my head with lyrics such as “Cause when the alley-cats come out, you can hear music from Kashka’s house”. The song is believed to be about a male homosexual couple: “Kashka lives in sin they say, with another man”. Is Kashka the name designated to a man? Lionheart has some of the best representations of Kate’s ability to tell stories through her music. Likewise, with the song Fullhouse, a particular favourite of mine, contains lyrics real cinematic scope, describing a scene which could come straight from a film noir.

Lionheart is probably the most English album ever; Oh England My Lionheart is probably the most English song ever. I’m not an anglophile but when I listen to this song I sure feel like one! An unabashedly romantic to the highest degree, yearning for an England that no longer exists, or perhaps never existed to begin with. I also notice the lyric notes on the CD and Vinyl for Lionheart has those of Oh England, My Lionheart is in Kate’s own handwriting; odd when you consider that Kate apparently doesn’t even like the song.

With Symphony In Blue Kate sings from the point of view of a girl who realises the joy of sex is not only what makes life worth living but is essential; “Here we have a purpose in life, good for the blood circulation, good for releasing the tension, the root of our reincarnations”; a liberating mindset from a woman who is only 20.

From Kate’s first three albums, I have decided this is my favourite. Lionheart represents Kate Bush’s musical progression;  It’s more varied and thematic than The Kick Inside and feels more complete than Never for Ever (not that I’m putting down those albums, they’re both also amazing), no two songs here sound alike. My advice is to listen to this album on a cold winter’s night, such atmosphere! Grab your tea and crumpets and be whisked away to Kate’s English dreamland.