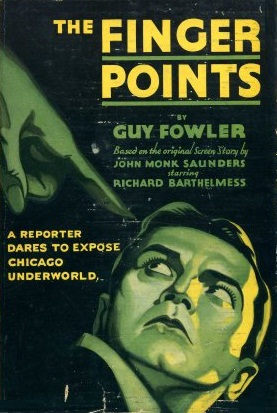 Extra! Extra! Read All About It!

In order for gangsters to thrive, three forms of corruption are required; the corruption of politicians, the police and finally the press. Unlike the newspaper in Warner Bros’ Five Star Final (also released in 1931) the paper of The Finger Points known simply as The Press are proud to be socially responsible and even calling themselves “the world’s best newspaper”. However the paper’s employee’s don’t entirely relish in this corny mentality as seen when the editor gives a speech at the end of the working day on what he calls the paper’s crusade, yet afterwards, the employees just laugh it up. Likewise, we also discover that reporters for The Press often just avoid reporting on the activity of gangsters in order to avoid the consequences.

Breckenridge Lee (Richard Barthelmess) on the other hand goes on step further and takes bribes from gangsters in order to suppress stories. The plot of The Finger Points was inspired by the true story of Alfred “Jake” Lingle, a reporter for the Chicago Tribune whom had been suppressing stories for $60,000 a year from Al Capone. Lingle was shot to death on June 9th, 1930 – a day before he was to testify against Capone.

Richard Barthelmess was an actor with a gentle and sensitive nature that had a lot going on behind his deep-set brooding eyes. I don’t think any other actor could have performed the role of the naïve but eager go-getting southerner Breckenridge “Breck” Lee. At the beginning of the film he gives a letter to the managing editor of The Press from his former editor of the Savannah Constitution, calling Breckenridge Lee “one of the best reporters I’ve ever had” and “He’s got the stuff. All he needs is a chance to show it. Give him a break into the big league”. Breckenridge mentions he only did general reporting although can I assume Savannah isn’t as tough as New York City in a movie which showcases the divide between northerners and southerners. Likewise, Breck’s group of friends along with Marcia (Fray Wray) and Charlie (Regis Toomey) really make for a fun trio.

I’ve read a number of reviews calling Breck’s transition to corruption unconvincing – I must disagree. I find the film makes this transition convincing in several ways; the pressure he’s under from the hospital bills he has to pay, his general naivety plus it is evident from his previous journalistic success that the recognition is slightly going to his head.

The Finger Points opens with an impressive, showy shot of a moving train as the camera pans from one side of it to another, once again disproving the notion that films from the early 30’s where largely static. This is also exemplified with a number of long panning shots of the expansive and busy newspaper office with the sound of typewriters going on non-stop in the background; I never tire of the classic atmosphere of a newspaper office.

My main reason for seeking out this obscurity was for a certain Clark Gable in an early supporting role while on loan to Warner Bros from MGM. Along with Warner’s Night Nurse released the same year, Gable is the show stealer. He is nowhere near as overtly evil than his role in Night Nurse, instead of playing a sympathetic but still manipulative gangster in The Finger Points. He is also given more screen time than in Night Nurse, in this one of his best early screen roles.

The crime boss in The Finger Points is simply referred to as “Number 1” and during his one scene in the movie, he is only seen sitting from behind a desk with his back to the camera with a face which is never seen like Dr Claw from Inspector Gadget. There is even a shot which visualises the title of the movie in which we see a close up of Number 1’s hand holding a cigar and pointing his finger towards the camera. I love this whole sequence as it leans towards being a live-action cartoon but doesn’t take away from the serious nature of the film.

The Finger Points has never seen the light of day on home video. As I’ve said before, no other decade seems to have as many hidden gems as the 1930’s; a real archaeological site of cinema.