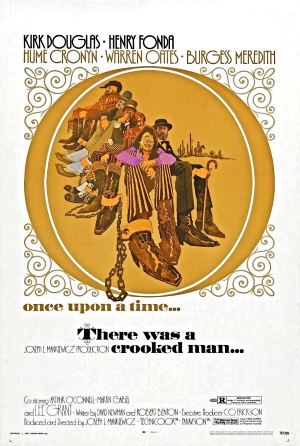 If more westerns were like The Was a Crooked Man I could consider myself a bigger fan of the genre. The opening scene in which a black maid who fakes the mammy act sets the stage for a film which defies convention. To date I’ve never seen another western like it; it’s not like a John Ford western or a Howard Hawks western, this is a Joseph L. Mankiewicz western; the first and only Mankiewicz western. I also love that theme song and am happy to hear it again and again in instrumental form throughout the film.

Mankiewicz was a master of handling dialogue and thus there is such a snappy pace to the whole film. “Nothing like fried chicken while it’s still hot and crispy” may be my favourite line Kirk Douglas has ever uttered in a film. The film is full of characters whom each get their own unique stories. The two homosexual lovers and comic buffoons played by Hume Cronyn and John Randolph have the most interesting character arc with an outcome which is the only time in the film someone isn’t totally out for themselves. The large-scale prison set on the other hand captures the mundanity of prison life with the film gradually building up to the impending escape, ranking There Was a Crooked Man among the great prison escape movies.

There Was a Crooked Man is a movie which combines old Hollywood mixed with new Hollywood with its traditional western setting and it’s dosing of cynicism. The cast features stars both veteran actors and younger stars and a script by David Newman and Robert Benton of Bonnie & Clyde fame. Even the one moral character in the film ends up turning bad. Henry Fonda plays the moral role he was known for throughout his career right up until the very end of the picture, leaving me with a big smile on my face. The movie is very cynical but it’s that kind of wonderful cynicism that makes you feel happy, and not feeling down. Although I would call There Was a Crooked Man a funny movie, it is not the kind of film in which I find myself laughing but rather laughing inside to myself.