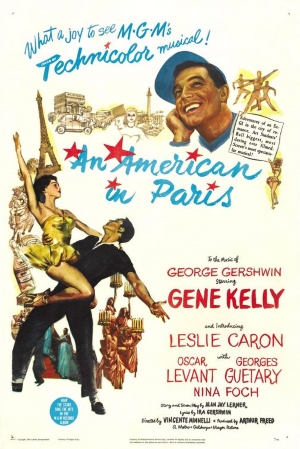 An American In Paris is a very different beast of a movie than Singin’ in the Rain. It’s not as fun as other MGM musicals (although there is fun to be had) but it’s better described as a more intellectual viewing experience. The film is light on plot like other classic Hollywood musicals but there is much going on internally between and within the characters. Simply put, this movie musical is dark. Gene Kelly’s role of Jerry Mulligan is a cynical loser who is not a very successful painter (although I do like when he tells of the pretentious art student, telling it like it is!). Likewise the romance between Jerry and Lise Bouvier (Leslie Caron) is a hopeful but not entirely a happy one. Even with Kelly and Caron ending up together at the end, the character relationships in the film are never resolved. During the film I kept thinking is she not better off with Henri Baurel (Georges Guetary)? The guy who is a successful actor and saved your life during the war or the loser whom you only recently met? Likewise in Milo Robert’s (Nina Foch) final appearance she states “I think I need some champagne” and is never heard or seen again. Even though her character denies wanting more with Kelly than championship and only wants to help him professionally in a surprising prostitution reference (“If you’re hard up for companionship there are guys in town who do this kind of thing for a living, call one of them”), I never felt convinced by this. Who says classic Hollywood is all just happy endings?

An American In Paris is the perfect display of the artistry of director Vincente Minnelli. He found French painting an inspiration for his own style; a skill he would incorporate into other productions such as Lust for Life. There couldn’t be a better or more obvious choice of director for An American In Paris than Minnelli. Not many other directors can use space as effective as Minnelli and display such a fluid motion of the camera. Just look as the film’s introductory sequence to Gene Kelly and his chums or the shot of Kelly walking down several flights of stairs in his apartment building; thus I can forgive the very visible camera shake 47 minutes into the movie during the Tra-la-la number. Even though he was a contract director (he made 33 films, only three made outside of MGM) he rose above these constraints and formed his own style whereas contract directors where usually assigned to conform to the studio’s standard and aesthetic. Whether or not he can be classified as an auteur there has been no other filmmaker like him in Hollywood history.

The film’s sets themselves look like they’ve been lived in instead of coming off as totally shiny and glossy with frames still looking like Paris as the impressionists saw it. Have neighbourhoods in Paris ever looked like this or is it just movie fantasy? Likewise take in the appearance of the Beatnick nightclub and observe the early incarnation to the modern day world of the hipster.

Kelly’s ability to dance alongside children and interact with them is something no one could do better than him which is evident from the genuine reactions from the on looking kids during the I Got Rhythm number; truly the dancing figure for the everyman. Leslie Caron’s introductory ballet sequence on the other hand is a Technicolor assault on the senses; the backgrounds are one solid colour while she wears dresses which totally contrasts them. Could you ask for a more memorable first ever screen appearance; complete with a sexual chair dance and one flexible body. Likewise the contradictory humour from the sequence’s narration always makes me laugh. Another major musical highlight is Oscar Levant’s dream sequence which reminds of the Buster Keaton short The Playhouse in which every member of the theatre is played by Keaton; likewise here he have an army of Oscar Levant. The sequence was actually his idea and along with the character he portrays in the film reflects his real life personality as a neurotic. The appearance and the colours of the sequence definitely remind me of Powell and Pressburger; surely the filmmakers must have taken inspiration.

They do save the best for last however in the form of the American In Paris Ballet; among one of the greatest things ever committed to film. A sequence which takes full advantage of cinema as an art form; could the entire thing be recreated on the stage? Watch French impressionism come to life in a 17 minutes feast for the senses which is artful without being artsy. There’s chorography and then there’s this with so many people moving, dancing and doing their own thing; with Gene Kelly’s graceful yet masculine dancing still being at the centre of it. Fred Astaire once said he didn’t want the camera to dance for him but rather stay stationary with as few cuts as possible. Kelly’s style is very much the opposite of this in that the camera movement is integral to the dance but doesn’t take away from his talent, not one bit. Yet I haven’t I even mentioned the music of Gershwin; could it be more lush and rich?