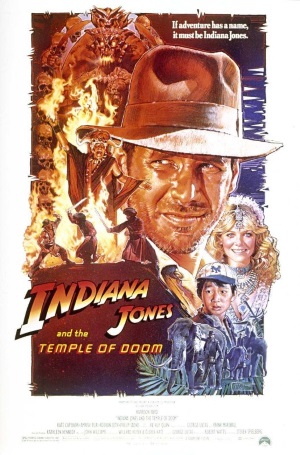 Ah, Indiana Jones and the Temple of Doom. One of those films which I thought was beloved for many years until the advent of the internet in which I discovered it actually gets a lot of stick. Well never fear Temple of Doom, as I am here to defend you against waves of undeserved criticism. So hold onto yo potatoes, it’s time for a controversial review of unpopular opinion.

I’ll begin my defense of Temple of Doom by discussing the movie’s two not so beloved supporting characters. First up its Short Round as delightfully played by child actor Jonathan Ke Quan. I love Short round for several reasons with the first being the endearing relationship he shares with Indiana Jones. Unlike Indy’s other companions, Short Round idolizes Indy. The moment in which Indy places Short Round’s cap on his head after freeing him from the Thuggee cult’s spell perfectly sums up their relationship and it gets me every time. Short Round saves Indy’s life on multiple occasions; In fact, sometimes I wonder how he’s even still alive without him. In comparison to a more beloved character in the series, Henry Jones senior, who almost gets Indy killed on a number of occasions thus rendering the criticism of Short Round being a hindrance to Indy invalid. But I hear you say, Short Round has an annoying voice? – Not at all. Short projects a voice of juvenile innocence and adventure. Short Round is like a kid’s fantasy, what’s cooler than getting to be Indiana Jones’ sidekick? Who wouldn’t want to be Short Round? Well, I’d rather be Indy himself, but being Short Round is the next best thing.

But how do I defend Willie Scott?! This bastion of female serotypes! Oh please, quit the feminist double standard. Outrage is none existent when a character exhibits male stereotypes (not that there should be). Shouldn’t true equality between the sexes allow for a female character to be portrayed as incompetent rather than imposing creative limitations on how women can be portrayed in fiction.

For those who call Willie annoying; well let’s agree to disagree. I’ve never found the character of Willie to be annoying and I believe one of the reasons for this is that she is punished for her selfish actions throughout the film. Her character is supposed to be unlikeable and the movie is fully aware of this by making her receive comeuppance. Willie holds some similarities with Marilyn Monroe in Gentlemen Prefer Blondes with her preoccupation with diamonds and her intention to get rich by marrying a particular wealthy gentleman, only to find out they’re a child. Just like Monroe, Capshaw displays a wide range of facial expressions and excels in her comedic timing. During the movie Willie matures, she shows concern for Indy and Short Round during the later portion of the film and even punches bad guys during the mine cart chase, a far cry from her earlier self. I love this trio of characters, so yeah, what are you going to do about it?!

Temple of Doom begins not with the build-up to an action scene but rather a musical number (with the opening shot of the gong is surely a little tribute to the Rank Organisation). I’ve never heard every rendition of Cole Porter’s Anything Goes but surely this has to be the best version of the tune with Kate Capshaw singing it in Mandarin. The superb rendition of the song along with the dance choreography, the costumes and shear sparkling on-screen, this may be the greatest musical number from a non-musical film. It might seem odd to start an Indiana Jones movie with a musical number but as it captures the 1930’s setting and exotic tone of the series so against the odds it works and works magnificently. Temple of Doom even serves as a travelogue for India with its gorgeous landscapes, accompanied by John Williams at his most exotic.

Temple of Doom is a film that doesn’t beat about the bush and gets over the top very quickly. This is another aspect that sets it apart from Raiders and Last Crusade as the action in Temple of Doom is the least plausible from the original three movies; hence why moments such as the trio escaping from the plane via jumping out of it on a rubber raft come under criticism. However, I believe there’s a fine line between action being implausible but not the point in which you can’t suspend your disbelief (yes I’m looking at you Nuke the Fridge) and I feel Temple of Doom achieves this fine line. The second half of Temple of Doom is one huge roller coaster ride with many classic B-movie and adventure serial pitfalls; a room with a descending spiked roof, a conveyor belt with a crushing roller at the end, a scene atop a rope bridge and the best of all, the mine cart chase sequence – an absolute master class of action movie filmmaking. After the trio escape from metaphorical hell, the final kiss between Indy and Willie is one of the most satisfying in all of cinema.

Temple of Doom is too juvenile you say? You’re saying juvenile like it’s a bad thing. I like all the weird creepy stuff; the bugs, the monkey brains, hearts being ripped out of people’s chests. It’s repulsive in the best sense of the word. But Temple of Doom isn’t a stupid film. No one ever seems to mention Indy’s character arc of overcoming his selfish streak. During the first half of the film, he is only concerned with obtaining his “fortune and glory”. Even after visiting the baron village and obtaining the Sankara Stones, his personal gain remains his only objective. It’s not until he sees with his own eyes the children in slave labour that he changes his ways. Likewise, people praise The Empire Strikes Back for being “dark”, why doesn’t this logic of darkness being synonymous with quality not work for Temple of Doom?

But let’s get into the real serious stuff – the film’s portrayal of Hinduism. I don’t claim to be an expert on Hinduism but I’ll attempt to the best of my ability to defend this most controversial aspect of the film. The villains of Temple of Doom, The Thuggee, were a cult who resided in India over several hundred years who would strangle travelers and steal their belongings (hence the origin of the term ‘thug’). The Thuggee were followers of the Hindu Goddess Kali, however, in Hinduism, Kali is not an evil entity, but rather the goddess of time, change and energy. As what The Thuggee believes is not what Kahali stands for, it makes the villains more interesting as they religious extremists, desecrating a faith for their own selfish gain, such as The Westro Baptist Church to Christianity or Isis to Islam. I believe the filmmakers are aware of this, as evident in the scene towards the end of the film on the dangling rope bridge. Just before Indy sends Mola Ram to his death, he utters “You betrayed Kali!”. Raiders and Last Crusade both show that the God of Christianity exists in the Indiana Jones universe. Does the spiritual power to the Shankara Stones lend legitimacy to Hinduism then?

Then you’ve got the usual crowd with their screams of “racism!”. Does the movie have a stereotypical portrayal of Indians? I don’t see Raiders or Last Crusade having such a loving portrayal of the German people but of course, they’re white so it doesn’t count. I’m sick of engaging in this game. When a film is labeled for apparent racism I think to myself, was there malicious intent behind it? Temple of Doom doesn’t give into any pretense of political correctness with its white saviour protagonist, touchy religious subject matter and stereotypical female lead; deal with it.

I consider Temple of Doom to be no less worthy of a film than Raiders or Last Crusade. Like how Temple of Doom dared to be different and the black sheep of the series, I dare not to bow to the will of popular opinion. What are you going to do about it!? For you see my opinion is always correct, except for the times when I am wrong, which is never.