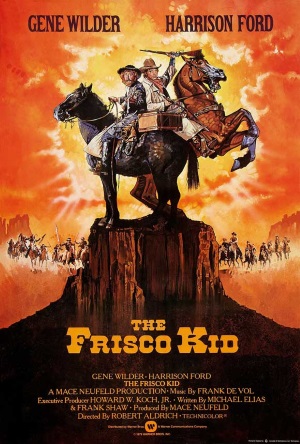 Its movies like The Frisco Kid which are right up my alley – a totally bizarre, odd ball comedy. A movie which feels like a classic Hollywood western but about a man who is in a totally alien world. The odd pairing of actors Gene Wilder and Harrison Ford works like a charm. Just like how you wouldn’t expect these actors to team up, you wouldn’t expect a rabbi and a Wild West cowboy to be a duo. There’s such pleasure watching the two interact and develop their odd, endearing bromance; Tommy (Ford) has no reason to stay with Avram (Wilder) other than he’s formed a liking to him. Harrison Ford goes from space cowboy in Star Wars to actual cowboy in The Frisco Kid, showing he really had a knack for playing ruffians. However, his character is not just a Han Solo redux. Unlike Solo, he’s not just out for himself but wants to give a helping hand to underdogs.

The Frisco Kid showcases the absurdity of faith but also celebrates it at the same time. Rabbi Avram Belinski follows his faith to a tee (despite being ranked almost last among his peers strangely enough). He would put his life and the lives of others on the line for the Torah or in order to obey the Sabbath. Yet Tommy defends and even lauds Avram’s actions as a man dedicated to his faith, even if he put his life in danger for religious reasons.

Likewise the Native Americans they encounter along their travels have a failure to understand the God of Judaism, Christianity and Islam. In one dialogue exchange, the Indian chief is perplexed that this God can make rain yet he doesn’t because as Avram puts it, “that’s not his department”. Yet the chief asks if he wanted to he could, and Avram replies yes. Yet Avram contradicts this statement later in their discussion when he proclaims God can do anything; the chief responds with “then why can’t he make rain?” and Avram loudly states “because he doesn’t make rain!”. However, on top of this Avram tells the chief that there is only one God and that he’s your God too. Take that as a bit of falsifying another’s faith.

However, The Frisco Kid is a movie which showcases peace and unity between cultures. Along his travels, Avram encounters whites, blacks, Native Americans, Christian monks and the Amish. When he first encounters the Amish he mistakes them for rabbis due to their similar attire, perhaps symbolising that we’re not all so different. Here Gene Wilder shows he is an actor who is not afraid to celebrate their religion and culture on screen; even if he is playing a neurotic Jew but not in an annoying way. The Frisco Kid is a movie which could possibly appeal to the both the religious minded and the atheist alike.