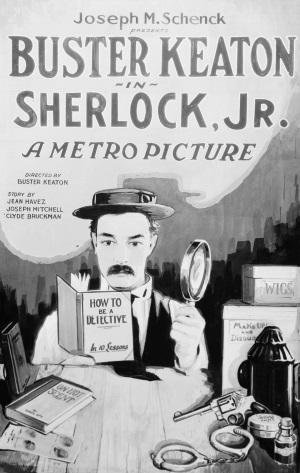 I’m not a silent film aficionado, I’m more of a tourist when it comes to this era of filmmaking. Sherlock Jr. is the only silent film I’ve ever awarded a perfect five-star rating and I doubt I will ever come across another silent movie as fun, thrilling, inventive or as mind-blowing as Sherlock Jr.; in my view Buster Keaton’s crowning achievement. Most of Keaton’s silent output is great but even by his impeccable standards, Sherlock Jr. goes beyond the call of duty. It’s more surreal and avant-garde than his other work with Keaton plays a wannabe detective who gets to go into the cinema screen and live out his fantasy as a great detective. Like an audience member watching a movie, Keaton’s character gets to escape the real world and be what you can’t be in real life. Sherlock Jr. captures the magic of cinema like few other films have and at an economic length of only 44 minutes, it’s a film you can pop on any time.

The special effects on display here blow my mind every time. Just how did he do that stuff? Part of me doesn’t want to know in order to keep the mystery alive. Perhaps a special effect isn’t so special if you look at it and can and immediately know who they did it. CGI can take a back seat! These are true special effects. Keaton’s trademark of physical humor and stunt work is on full display here with the film’s climactic chase sequence being nothing short of astounding. It is my second favourite high-speed pursuit in a movie after the final car chase in The Blues Brothers. The gags and stunts in this film never cease to amaze me and always take me by surprise no matter how times I watch the film. I also must give props to the fantastic jazzy, noir-like score of the Thames Silent’s print of the film, and is it just me or is that James Bond music at exactly 39 minutes and 56 seconds in?

You know all the cliché terms people throw around in movie reviews: “timeless”, “classic”, “ahead of its time”. If there was ever a movie which completely deserved them then this is it.