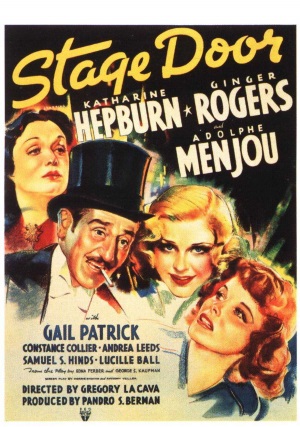 Stage Door is very much the poverty row version of MGM’s The Women. It features only one big box office star, another who had become box office poison and a supporting cast who would later go on to play notable prominent roles in later films (Lucille Ball, Ann Miller, Eve Arden).

Ginger Rogers and Katharine Hepburn where the two big rivals at RKO pictures with Rodger’s career on the up and Hepburn’s career on the down yet you can feel their mutual respect for each other as the film progresses (in the fictional realm at least). Stage Door follows a group of actresses living in a drab theatrical boarding house trying to make it in the world of show business. Right of the bat the movie is emotionally investing as the cast of street smarts constantly spew one-liners and witty remarks in an effort to try and deal with their lack of success amidst the depression-ridden 30’s; the film succeeds in evoking both laughter and sadness simultaneously with its barrage of highly relatable human emotion – The lightning-fast dialogue alone makes Stage Door worthy of multiple viewings.

Supposedly the filming of Stage Door began without a completed script resulting in much of the film’s dialogue being improvised. The interactions between the female cast feels real; the acting present in the movie doesn’t feel like acting, almost like I’m getting a voyeuristic insight into these character’s lives.  Likewise, the film even has an early appearance by Jack Carson as an over giddy lumberjack on an arranged date with Jean Maitland (Ginger Rogers); always a great screen presence no matter how brief his appearance is. I find Stage Door a one of a kind film; it has a raw quality, one that can’t be created intentionally making it a rare treat in many respects. The cast and dialogue is just too good that I really become attached to these characters and almost wish the film could be a bit longer.

Katharine Hepburn’s Terry Randall is another instance of Hepburn playing the odd one out. I do love Terry Randall, she’s the one character in the boarding house of whom clearly comes from an upper-class background and she is only one who achieves stage success by landing the lead in a play despite her lack of acting experience. With her go-getter attitude, Terry is the embodiment of the individual as summed up in one line: “You talk as if the world owed you a living. Maybe if you tried to do something for the theatre, the theatre would do something for you”.  I get the impression Stage Door purports the idea that one who comes from a lower class background will find it harder to overcome these ties and find success. In one dialogue exchange Terry asks the other women “do you have to just sit around and do nothing about it?” and the character played by Lucille Ball replies “maybe it’s in the blood, my grandfather sat around until he was 80”. Terry is clearly more dedicated to her craft than the other woman in boarding house, discussing Shakespeare and other aspects of theatrical arts, while the other conformist woman poke fun and shun her for it. This does make me question what they are doing there in the first place; I guess they have just been beaten down by the system that bad. One thing Terry is not, however, is a snob. She doesn’t look down on the girls from a high and mighty position and even makes the effort to learn their slang. When I doubt I will ask myself, what would Terry Randall do?