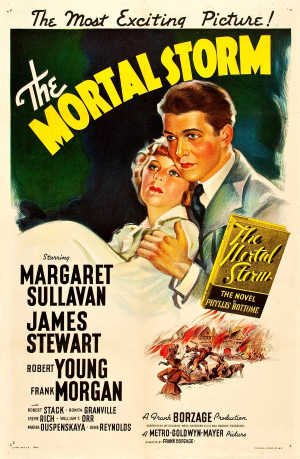 I Did Nazi That Coming

I try to avoid calling movies underrated or saying “Why is this not more well known?!”, otherwise, I would sound like the most malfunctioning record but as to why The Mortal Storm is not more famous goes beyond just my own personal preferences. The fact that Hollywood’s then biggest studio Metro Goldwyn Mayer would release an anti-Nazi film at a time when the US and Germany were not involved in any conflict should be a bigger deal than it is. To give some historical context, although it seems hard to believe nowadays, fascist and other Nazi-like ideas were out in the open throughout the United States during the 20’s and 30’s (heck, just look at the film Gabriel Over the White House from 1933, also released by MGM, or the public initial backlash against films with pro-interventionist sentiments such as Sergeant York or To Be Or Not To Be). Prior to the US involvement in the war, there was even uncertainty as to whether or not the US should take part in the conflict in Europe.

The Mortal Storm being overlooked is criminal. It deserves the special edition DVD treatment with documentaries behind its production. I’m sure there must be an interesting story behind the making of this film. MGM has generally been seen as a studio who played it safe, thanks in part to its conservative studio head Louis B. Mayer. So it comes as a surprise The Mortal Storm would come from this studio and they paid the price. The Mortal Storm lead to MGM films being banned in Germany. The word Nazi is never used once throughout the film, while the characters I can only assume are Jews are referred to as Non- Aryan. I wonder if this was done to prevent further controversy surrounding the film but it’s still an incredibly brave picture.

The core story is about how Nazism tore German families and friends apart due to racial and political differences. The Roths (Jewish I assume) are a happy picture postcard family one day, the next there are completely torn apart. Things go bad for the family from the moment in which it’s announced Hitler has become chancellor of Germany as the adopted, non-Jewish sons of the Roth family begin saying disturbing yet enthusiastic comments (“If peasants want to keep their cows they better have the right politics”). Likewise, the patriarch of the Roth family and the professor of the town’s local university played by Frank Morgan is treated with the highest levels of respect one day and is awarded for his contributions to the fatherland. Not long after Hitler’s rise to power his students are boycotting his class after he states that science has shown there is no difference between the blood of various races.

The Mortal Storm is a work of propaganda, not that there’s anything wrong with that. Propaganda is an art form in itself, one which tries to get an emotional reaction out of the viewer in order to convert them to one side. The Mortal Storm achieves just that. The tension during the film just builds and builds, concluding in an ending which is one huge punch to the gut.

Watching the film again in order to write this review I surprised just how engaging it was on a further viewing. There are many little touches I never noticed previously, such as when Robert Young’s character announces his engagement to Margaret Sullavan, James Stewart is the only character the room who does react with joy. I do also have to ask how Stewart, a man who would become a World War II hero and later supporter of the Vietnam war must have felt playing a character who is a pacifist.

Majority of the film is shot on sets with the use of painted backgrounds and miniatures, yet the whole thing still looks fantastic and looks more idyllic than real-world locations could. You really get a sense for this small town in the Alps. The only complaint if any I can find with the film is that opening narration which is overly bombastic.

The casting of the previously paired Shop Around the Corner stars couldn’t be more perfect. James Stewart and Margaret Sullavan play two friends who are forced to become lovers due to the impending circumstances – I can’t recall any other movies which portray a love story like this. Sullavan often portrayed characters who represented bravery; her voice is so fragile yet powerful at the same time. The cast isn’t the only tie the film shares with The Shop Around the Corner; both films represent a European society which was on the brink of destruction. The Mortal Storm shows how even an enlightened society can turn to authoritarianism.