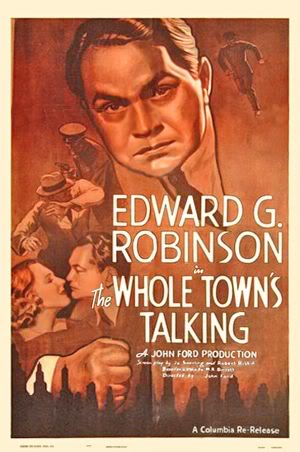 A Tale of Two Eddies

It’s already unexpected that John Ford directed a screwball comedy (as well as a film set in urban America, which he rarely did), even more so that it’s one of the inventive, inspired and quirky screwball comedies ever from a director who has no other association with the genre. The Whole Town’s Talking is a delight to watch as it unveils each increasingly surreal situation.

Edward G Robinson appeared in a number very quirky comedies such as The Amazing Dr Clittlerhouse, Brother Orchid and Larceny Inc which have made me prefer him in comedy over drama. Here you get two Robinsons for the price of one playing the dual role of the lovable, naive Jonsey and the notorious gangster Mannion. I believe this may be Robinson’s best performance. Not only does he play two characters who look the same but are worlds apart in terms in personality, he also has to play Mannion pretending to be Jonsey! Even though he is held in high regard as an actor, I feel Edward G. Robinson has never been truly celebrated for just how versatile he is; going far beyond the gangster roles he is most famous for. The film’s use of spilt screen and back projection techniques are executed to a seamless degree. In one particular shot featuring the Robinsons sharing the frame, notice how the smoke coming from Mannion’s cigar enters the other end of the frame over Jonsey.

Jean Arthur’s Miss Clark is one of the coolest, craziest and more carefree characters ever. When she finds out she has been sacked after arriving to work late she doesn’t care in the slightest. Or how about when she discovers that Jones keeps a picture of her by his bedside which he stole from her at the office. She isn’t disturbed, she finds it cute! Everything she does is so laid back and without a care in the world; I love this character!

The only minor complaint I have with The Whole Town’s Talking is the possible plot hole at the beginning of the film in which Jones rushed out of his apartment after the realisation he is late for work he leaves the bath running. This had me thinking that when he returned home his house would become flooded but the running bathtub is never addressed. Regardless, the film’s screwiness is in no short supply. This movie not getting the recognition it deserves? Mannion!