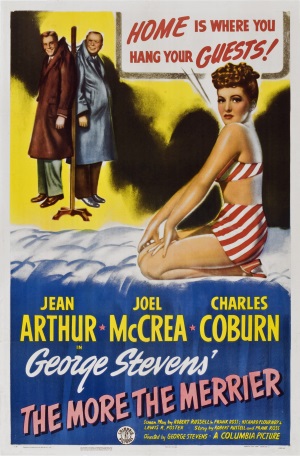 The More The Merrier represents the screwball genre adapting for the war years however this was at the end of the genre’s original run. I wonder why there were not more screwball comedies made during the war period? Did people become more cynical with the war or perhaps the genre was simply made for the depression era. Instead of taking on the establishment like the genre screwball did during the depression, The More The Merrier is supporting it. It is refreshing to see a propaganda film from the war years which is less gloomy and shows how common folk got on with their daily lives during the war.

My main flaw with The More The Merrier is Joel McCrea. He’s fine but that’s the problem, he’s only just fine; a serviceable actor who doesn’t leave a great impression. He’s the weak spot of a trio of characters who could have been much stronger with a more charismatic actor. Granted this was during the war and most of Hollywood’s big male leads were off in Europe kicking Hitler’s ass. Could Cary Grant have played the role instead, but perhaps a big star like that couldn’t play a role in he doesn’t show up until half an hour in. The trio of characters still manages to be fun with Jean Arthur playing the straight man and Charles Coburn as an immature and conniving old man who still seems like a kid at heart; while the romance between Arthur and MrCrea is still believable and handled very well as they spend the final third of the film quietly denying their feelings for each other.

Jean Arthur and Charles Coburn are one of the more unconventional screen pairings in Hollywood starring in three films together, just look at the morning schedule scene; comic choreographed brilliance and by far my favourite part of the film. When McCrea enters the picture though I feel it is never as strong. Also after you watch this movie you may find yourself saying “dam the torpedoes, full speed ahead!”, a lot.