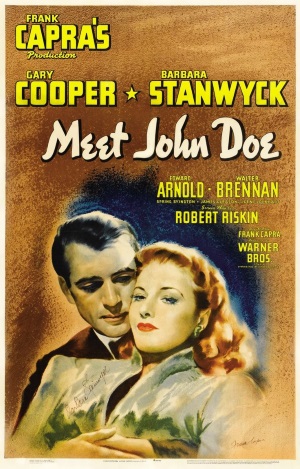 A Face In the Crowd

Sadly Meet John Doe appears to be an uncared about film falling into the public domain. I’ve previously wondered if this film could have the power to inspire real-life John Doe clubs, like Fight Club inspiring real-life fight clubs. Meet John Doe is the ancestor to film’s like A Face in the Crowd and Network, chronicling the rise and fall of a media built character. Meet John Doe is not thought of as a conspiracy/paranoia film but is a few actions scenes away from being a conspiracy thriller. After watching you’ll start feeling more like tin foil hat wearing conspiracy theorist untrusting of government and the establishment.

John Doe is a Christ-like figure; he preaches loving thy neighbour when he is disgraced a newspaper editor proclaims “chalk one up for the Pontius Pilates of the world” and even plans to sacrifice himself on Christmas day. On top of that, Barbara Stanwyck’s speech at the end in which she tells John he doesn’t have to die for the idea of the John Doe movement – that somebody else already did – the first John Doe and he has been keeping the idea alive for 2000 years, all while the Christmas bells ring. Classic Hollywood films sure love their hard-hitting symbolism and metaphors.

Barbara Stanwyck is a phenomenon here with so much life and energy she can make any bit of exposition entertaining. As for Gary Cooper and Walter Brennan in of their many film pairings; what is it makes them a great duo? Perhaps it’s just the humorous interactions of two folksy Americans. Cooper’s boyish charm is on full display here, such his baseball pitching in a hotel room to his curious on look at a naked statuette. Meet John Doe is one of the finest performances he ever gave with his outburst at the dinner meeting making the hairs on my neck stand up. Walter Brennan’s The Colonel, on the other hand, doesn’t trust any media, authority or society in general. He’s comically cynical in the extreme and probably be a conspiracy theorist if he had lived in later decades. Throughout the film he refers to others as “helots”; state-owned serfs of the ancient Spartans (“When you become a guy with a bank account, they got you, yes sir, they got you”).

Although the John Doe movement claims the John Does are inheriting the Earth, the movement is funded by a corporation; so did they not see someone like D.B Norton taking advantage of them? Edward Arnold as D.B Norton is one scary, menacing guy who is complete with his own personal army force, giving the full authoritarian dictator vibes. When he sees his servants listening to Doe’s speech on the radio and applauding, he realises the political power he can have if he can get John Doe on his side. Under a scheme to buy his way to power he uses the John Doe movement to further his own agenda, to create a political party of which he leads in order to become President of the United States. His description that he plans to create “a new order of things” and “the American people need an iron hand and discipline” sounds like he has the intent of turning the country into a fascist dictatorship. There’s no doubt that Meet John Doe among other things was an argument against American isolationism in the war.

Another striking moment of Meet John Doe is the monologue given by Bert Hanson, the soda jerker (Regis Toomey) on how little we know about our neighbours and how a failure to get the whole picture leads to misconceptions of other people. It’s true in real life, people you live next to for years and you never contact them: perhaps the guy next door isn’t a bad egg.

Many of Capra’s films showcase the people’s need for a leader (Mr. Deeds, Mr. Smith or George Bailey) and in turn, they appear to be clueless and misguided with one (think of Pottersvillie in It’s a Wonderful Life) in a showcase of Capra’s darker side. Here the public buying up what the media tells them such as when Norton exposes John Doe for being an apparent fraud in one of the movie’s most powerful scenes as the movie captures so vividly the destruction of a dream. As dark as the movie’s ending is, it still remains optimistic in which the fight goes on (“there you are Norton, the people!”).