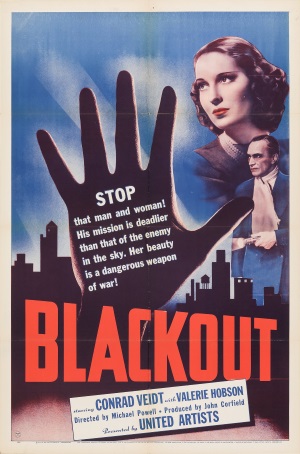 Contraband holds a number of similarities to All Through The Night (released by Warner Bros the following year). Both films are Hitchcockian thrillers and (as the title of the latter suggests) take place all through a single night in which a romantic hero inadvertently infiltrates a Nazi spy ring (even though the word “Nazi” is never used in ether film). On top of that, Conrad Veidt appears in both films, although he is cast as a villain in All Through The Night. I love films that effectively play out within a condensed time frame and Contraband is simply enormous fun to watch – one of those films which I felt like I had to tell someone about it afterwards I was left that thrilled. Contraband would be renamed Blackout for the US release, but I think Contraband is the cooler title.

Contraband would offer Conrad Veidt the rare role of a hero as Danish seaman, Captain Anderson. Veidt doesn’t have the looks matinee idol but he is very suave and pulls of the romantic hero with ease (sadly this great actor would pass away only three years following the release of Contraband from a heart attack aged 50). The bane to Captain Anderson, Mrs Sorensen (Valerie Hobson) is introduced defying the captain’s orders and not wearing a life jacket despite what the chattering gossips around her say. This defiance and Hepburn-esque, free-spirit attitude establishes Mrs Sorensen as a real badass.

The chemistry between Veidt and Hobson has shades of William Powell & Myrna Loy, with the two sharing moments reminiscent of screwball comedies. For example, the scene in which Sorensen calls for a taxi in a feminine voice after multiple taxis ignore Anderson is similar to the hitchhiking scene from It Happened One Night. Contraband makes reference to bondage on a number of occasions from Anderson’s early foreshadowing asking Sorensen “Have you ever been put in irons?” to the rather erotic, James Bond-style scene in which they attempt to break free after being tied up by their Nazi captors. All this sexual tension culminates by the film’s final scene in which Anderson directs Sorensen to drop her life jacket as it hits the floor and they go into a clinch, followed by phallic symbolism of a dripping wet anchor in the final shot – as steamy as a film from the 1940s can get.

Contraband is set in November 1939, the phoney stage of World War II. Like Powell & Pressburger would do in their subsequent film 49th Parallel, Contraband is clearly a rally call to other nations against neutrality in the war. Although a British film, Contrband is one which should ignite the patriotism in any Dane as Captain Anderson and his fellow Danish patriots from the Three Vikings restaurant in London work together to infiltrate the London based Nazis. Contraband offers an insight into life in London during the blackout as people try to go about their lives as normal, using torches to navigate their way in the street (they must be pointed down or else the blackout warden will call you out) and closing their eyes for ten seconds before going back outside. In one scene two wardens approach a man lighting up a cigarette in the street to which the man angrily responds “Why don’t you do something to earn your 3 quid a week and leave taxpayers alone”. With this portrayal of the restriction of liberties as well as the aforementioned refusal of Mrs Sorensen to be compelled to wear a life jacket, I can’t help for Contraband to directly remind me of recent world events as of writing this review. Due to the blackout setting, much of Contraband is visually dark and makes great use of chiaroscuro lighting and expressionist visuals – appropriate considering that the film stars the most notable cast member from the granddaddy of German Expressionist films, The Cabinet Of Dr Caligari. Unfortunately Contraband has yet to receive the special edition, 4K re-master treatment, with the film only being available in a scratchy print on an old Region 1, Kino DVD.

I do have to question if escapade off Captain Anderson’s ship and into London by Mrs Sorensen and her accomplice Mr Pidgeon (Esmond Knight) was part of a mission or a spur of the moment decision since we are lead to believe the British interception of the ship was unplanned.  It’s never made clear who or what Sorensen or Pidgeon are working for however it is reveled their aim is to find out under what neutral names, German vessels sail across the Atlantic, so in all likelihood, they’re probably British spies. Thus I do theorise that Sorensen and Pidgeon had a part to play on the British authorities stopping the ship and forcing it to dock overnight. This theory is backed up by the film’s ending in which one of the British authorities gives Anderson what he is told is a box containing painkillers to help him with his illness. Afterwards Mrs Sorensen tells him to look in the box only to find it contains the pocket watch which he lost in London, proving more or less she is working for the British authorities.

Adjoining the Nazi’s London layer is a warehouse full of busts of then British Prime Minister Neville Chamberlain by a company known as “Patriotic Plaster Products”. Why does a Nazi spy ring have a warehouse full of busts of Neville Chamberlain? Likewise, I can’t tell whether or not the film is trying to denigrate Chamberlain. After Anderson knocks out one of the Nazi ring leaders using one of the busts which simultaneously smashes it to pieces, Anderson responds “They always said he was tough”. Chamberlain left office on May 10th, 1940 and Winston Churchill became Prime Minister –Contraband was released in UK theatres the following day.