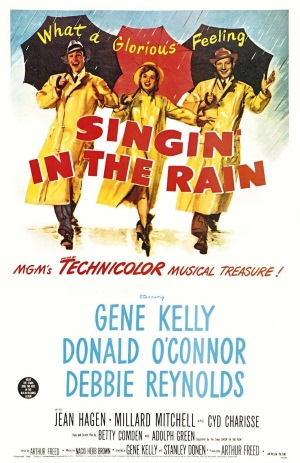 What is about Singin’ in the Rain that even the film elite hold it in such high regard and has even appeared on a previous Sight & Sound poll as one of the ten greatest films of all time, ranking among traditional highbrow films? Singin’ in the Rain is not just a great musical but also a film with a great story. It is not as harsh a critique on Hollywood as Sunset Boulevard but who would have still believed the content of fan magazines to be genuine after this film. Singin’ in the Rain has a cynical side as it pulls apart the Hollywood myth; beginning with Don Lockwood’s back-story as to how he rose to fame, which the movie comically shows us is full of crap. “Dignity, always dignity” but not if you want to make it to the top but at the end of the day  Singin’ in the Rain is a movie for movie lovers which celebrates Hollywood as much as it makes fun of it.

The film is set in 1927 albeit a very colourful 1927. In 1952 Technicolor films were in their final years of production and would soon become a thing of the past. The movie is a tribute to MGM producer and songwriter Arthur Freed – head of the MGM Freed unit – the producers of some of the greatest film musicals of all time. Although the days of the studio system where coming to an end in the early 1950’s as films from different studios started becoming homogenous and not containing unique aesthetics to each studio, the MGM musical still remained its own unique beast that no other studio could replicate. Likewise, the film studio in Singin’ in the Rain is a fictional studio and not MGM itself, I guess that would have been too much of a self-endorsement.

The soundtrack itself has entered the pop culture lexicon for good reason. I’ve had no shortage of listening to my CD soundtrack; glorious corn and camp topped with beautiful orchestrations, all of which never leaves your head and contributing to making Singin’ in the Rain one of the go-to anti-depressant films. Few other songs can lift my mood more than Moses Supposes or the film’s title number: could there be a greater expression of joy? After all, it is in the title; he is singing in the rain; turning the dreary rain into carefree joy, finding joy in despair. As for Make ‘em Laugh, even though it is a plagiarism of Cole Porter’s Be a Clown from The Pirate (1948), I considering Make ‘em Laugh is a superior rendition. There is also that disorienting fashion parade sequence which could be removed and have no effect on the plot but I do love me some 50’s fluff. But they do save the best for last in the form of the Broadway Melody Ballet. A number of MGM musicals had a lengthy ballet sequence, and to say they outdid themselves here would be an understatement as Gene Kelly dressed as Harold Lloyd with the go-getter attitude of the 1920’s celebrates a simple notion, “gotta dance!”. The visually asserting array of bright colours and impressionistic backgrounds is aided by Cyd Charisse; what a talent, what a figure!

Singin’ in the Rain presents a light-hearted and comical look at what actors and studios went through during the transition to sound. Few other scenes in cinema are as entertaining as Lina Lomant’s failure to understand sound recording technology. This scene not only showcases the problems with the technology in its early days by picking up unwanted sounds (complete also with the classic angry movie director) but it perfectly captures the relatable frustration that comes with filmmaking. I can tell you there is nothing more frustrating than out-of-sync sound. Likewise, the star’s difficulty in adapting to talkies and being laughed at by audiences parallel the legend of audiences being in howls of laughter as actor John Gilbert’s attempts to deliver dialogue on screen. Jean Hagan playing the dumb broad Lina Loment does a comedy act similar to Judy Holiday but in my view better than Holiday ever did. Donald O’Connor on the other hand surely isn’t human with his vaudeville-style act his facial and body movements and ability to walk up walls. Just name me a film with a more astounding display of talent. Here’s to you Singin’ In the Rain, I bow humbly to your cinematic and musical perfection.