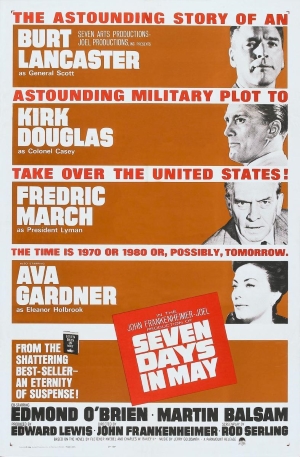 Seven Days In May is a film which tapped into cold war paranoia but still has relevance for today’s increasingly unstable political world. Now that we have arrived in the age of Trump and many people would shockingly actually like the premise of this high concept political thriller to play out successfully in real life, what better time to revisit Seven Day In May. A military coup in the United States? This is the kind of thing that happens in banana republics, not in the most powerful nation on Earth. The fantastical set up is the appeal of a movie like this; the idea that the so-called haven of democracy could potentially crumble. The big question though; could it happen in real life? Are the events in the movie plausible? To the laymen viewer, they are at least.

Seven Days In May has some powerhouse actors with serious charisma talking some serious politics; no action, just heart-pounding wordy exchanges. General Scott (Burt Lancaster) is a believer in a nuclear deterrent and doesn’t trust the Russians to hold their side of the deal. Is he someone who has a genuine concern or is he a megalomaniac taking advantage of a situation or both? The pairing Burt Lancaster and Kirk Douglas couldn’t be a better combo as military personnel with a mutual respect for each other. Their relationship is where much of the film’s emotion is drawn from with Douglas looking up to Lancaster and his eventual betrayal of him. Ava Gardner on the other and is the weakest link in an otherwise stellar cast. I’ve never thought much of her as an actress and this comes through here with a performance which is serviceable not much more.

The scene in which Kirk Douglas is pitched with the task of explaining to the President there may be a military coup to overthrow his administration is one of the best examples of expository delivery I’ve ever seen. I believe there are two reasons for this; firstly Kirk Douglas’ sheer screen presence and charisma and secondly, the tension is drawn from him embarrassing himself while trying to explain such a fantastical military coup. He delivers the lengthy monologue nervous and under pressure but while still remaining dignified. Plus that camera zoom and head tilt when he summarises his monologue makes the hairs stand up.

John Frankenheimer is one of the most visually striking directors in black & white with his use of shades of tones, he has a very striking style. The Saul Bass-style opening credits on the other hand show why the 1960’s was a golden age for title sequences as Hollywood attempted to draw audiences away from the TV and into the theatre.

Fredric March makes for a convincing leader as President Jordan Lynman. He is not a Trumpain figure, no he’s far humbler than that. His course of action over the last year bordered on criminal negligence, or at least according to General Scott. He has a 29% approval rating and the public has voiced “a universal rejection of your entire political philosophy” according to Gallop poll; he is a man who is not upholding his democratic mandate. Should there still be a respect for the office of the president if the country is against him? What’s more important, protecting a country against its government or loyalty to the constitution? The viewer is left to make up their own mind and the movie does not take sides. We never know the political ideology of any of the characters; the words republican, democrat, conservative or liberal is never mentioned. Seven Days In May is a movie with no clear-cut hero or villain; both sides believe what they are doing is for the best of America and by extension the world. By the end the answer as to who Judas is not so black and white (“Yes I know who Judas was. He was a man I worked for and admired until he disgraced the four stars on his uniform”).

Get Up Stand Tall, Put Your Back Up Against the Wall

To date, White Heat remains the only instance in which my first encounter with an actor instantly turned me into a fan. Typically for me, I become a fan of a performer over a period of time and after seeing a number of their films. Not James Cagney though. The scene early during White Heat in which Cody Jarrett gets a headache and needs to be comforted by his mother, my instant reaction was, “I need to watch any movie with this guy I can get my hands on”. I have no hesitation putting Cagney’s performance as Cody Jarrett in my ten favourite movie performance of all time. At this point in my movie watching life I had never seen an actor so on fire, so electrifying. His twitchy mannerisms, machine gun way of speaking his violence against women and possibly above all, his mother complex, exposing an unsettling, adorable side. Like wow, you do not want to be stuck in an elevator with this guy. I would later discover White Heat came after the classic Warner Bros cycle of gangster movies, making White Heat a nostalgic revival of the genre, making Cody and his mother products of a different age. Margaret Wycherly as Ma Jarrett is the next great stand out performance for me, a character who appears as the stereotypical “aw shucks” mother common in classic Hollywood, but her attitude could not be more different.

Boy is this movie fast paced. White Heat is one of the few times my heart my beating so much out of how exciting the movie was. When the film was over I had the closest I could fell to that sense you get after coming off a rollercoaster, expect to get it from watching a movie. I feel that’s the best way, to sum up White Heat, a rollercoaster of violence and emotions. Even the scenes of police officers discussing Cody’s psychological tendencies and the examination of their late 1940’s tracking techniques are riveting, but they do save the best for last. The Warner gangster movies ended with incredible final scenes with brilliant closing lines, White Heat’s may be the best of them all. I question if I’ll ever experience such a high level of movie watching euphoria on a first time viewing again. 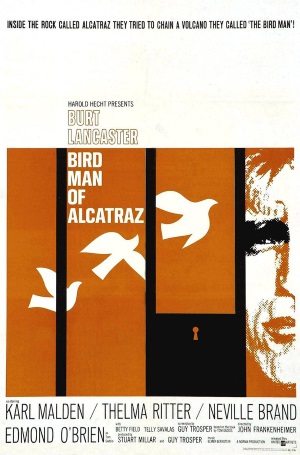 Birdman of Alcatraz isn’t just a movie, it’s an experience – the story of a man who’s able to lead a meaning and productive existence despite serving a life sentence in solitary confinement. A man who is able to create an empire of bird keeping and aviary research within the solitary confinement quarters of a prison. When I first watched Birdman of Alcatraz I only vaguely knew about the story of Robert Stoud and thus I was in awe as just how his empire gradually comes to be as he MacGvyers the little he has at his disposal to create a grand sanctuary. I don’t know what it’s like to be isolated in a confined area for days on end but I suspect this movie may provide the closest feeling I could ever get to it; black & white cinematography and claustrophobic prison cells go hand in hand not to mention the daunting narration by Edmund O’Brien creates an ongoing sense of foreboding.

Birdman of Alcatraz made me a fan of Burt Lancaster. It was not the first film I had seen him in but it was the first at which I was struck at what an immense powerhouse of an actor he is, carrying a two and a half-hour long, mostly single location picture. His portrayal of Robert Stroud is the classic characterisation of tough on the outside, soft on the inside. A heartless monster who learns the value of humanity and cares for a creature as delicate and feminine as a bird. It’s a dichotomy that can come off as very corny but Lancaster’s immense performance prevents it from coming off like this. Stroud’s relationship with his mother (Thelma Ritter) even has shades to the Cody Jarret mother complex. Yet just as compelling is the relationship between Stroud and the warden played by Karl Malden, which I feel is summed up with one line (and one of my favourite movie quotes), “That convict has been a thorn in my side for 35 years but I’ll give him one thing, he never lied to me.”

Birdman of Alcatraz is a tale of rehabilitation with a clear anti-death penalty message. Early in the film when Stroud’s mother speaks to First Lady Edith Wilson, she speaks of how she believes the current President doesn’t believe in the barbarity of “eye for an eye”. Due to Stroud’s pardon, the stone-cold killer went on to achieve great things in the field of aviary research and discovering cures for various aviary diseases. Later in the film, Stroud’s birds are taken away from him and he is unable to engage in commercial enterprise following rules from the newly established Federal Bureau of Prisons. The pain of seeing the one thing giving Stroud meaning in his life being taken away from him when he’s transferred to Alcatraz is unbearable viewing.

Like many biographical films, Birdman of Alcatraz receives criticism with the historical liberties taken; most prominently in this instance the fact that the real Robert Stroud was reportedly an incredibly unpleasant individual. I’ll say it now and I’ll say it again: Movies are not documentaries. When adapting a real-life story to the screen, changes and liberties are likely going to be made for the sake of storytelling and entertainment; would a story closer to the truth have been more interesting? My second rebuttal to the ‘not historically accurate’ criticism is that how many people would even be aware of certain historical figures if it wasn’t for their film biopics; movies can act as a gateway to learning about history. After watching Birdman of Alcatraz I wanted to read about the real Robert Stroud, otherwise, I might not have even heard of the man.