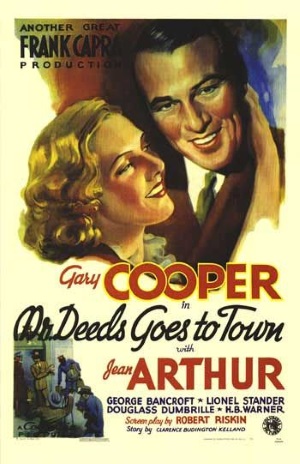 I’ll admit that it took me a while for Gary Cooper to grow on me as an actor and to see his appeal under his minimalist, low key style of acting; but eventfully I got it. It’s been said Cooper’s face was the map of America; so why in under God did they cast Adam Sandler in a remake of Mr Deeds Goes to Town?

Mandrake Falls is a town full of oddballs, and the naive but not a total dunce Longfellow Deeds comes off as a weirdo to the city dwellers who are fascinated by his behaviour and start mocking him. Mr Deeds Goes to Town certainly highlights the divide between city slickers and small-town folk; this is particularly evident in the scene in which Deeds, himself a poet meets a group of distinguished poets in the restaurant and is appalled by their snobbery and elitism to the point that he beats them up.  Likewise, the film also features Charles Lane as a lawyer, the inspiration for The Simpsons’ blue haired lawyer.

In an example of the darker side of Capra’s films, Mr Deeds Goes to Town is a cynical look at society and the media as a whole (“Why do people seem to get pleasure out of hurting each other, why don’t they try helping each other once in a while?”). Multiple people are out to snag Deed’s fortune while the media is out constantly pursuing him due to his odd but ultimately harmless behaviour; the media manipulating how a person is seen by the public. Mr Deeds is a man who became famous for inheriting a fortune, in other words, he’s famous for being famous and the newspapers appear to have nothing better to do than report on his escapades such as feeding donuts to a horse; relevant to today’s celebrity culture.

The sanity hearing at the end of the film is pure movie fantasy; I doubt in real life someone could be classified insane on such so-called evidence. In a demonstration of Cooper’s ability as one of the best actors when it comes to giving a rousing speech or monologue, he talks about the silly quirks we all have. Although the likes of “o” filling or knuckle cracking seems rather trivial, I’m always left with the impression that the movie is making a statement on society’s treatment of those who don’t fully “fit in” or adhere to conformity and asks the question; who is truly “normal”? 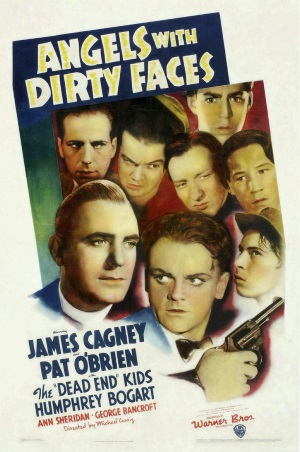 One of the things I love most about Angels with Dirty Faces is that proposes the age-old idea of a person’s entire destiny being defined by one single event. The fact that Jerry (Pat O’Brien) could run faster than his childhood friend Rocky (James Cagney) while being chased by the police for a petty crime would determine the paths they would take in life. If only Rocky could climb over that fence, things would have been so much different.

I’m a huge fan of the Warner Bros gangster movies of the 1930’s and Angels with Dirty Faces is probably the most classic of these movies In that it gets referenced and spoofed most in popular culture. These films deal with social issues, many of which are still relevant today. When I hear current news stories about crime and social issues, I often find myself thinking “They dealt with that in an old 30’s crime/gangster film”. Angels with Dirty Faces is no exception. Rocky Sullivan was never truly a criminal but his stay at a reformatory for his petty crime turned him into one. However, Pat O’Brien’s role of Father Jerry Connolly presents an incredibly stark contrast with today’s commonplace media reports of priests molesting boys. I find it fascinating to see a movie in which a member of the clergy is presented as someone who is treated with the utmost respect and entirely trustworthy, of course, this being an attempt to appease the Legion of Decency.

Even with the religious overtones, the movie still provides one of the most intriguing moral dilemmas ever presented in a movie; Rocky making the ultimate sacrifice. Before his execution, Father Connolly asks him to pretend going yellow and show people he was a coward by begging for mercy before being sent to the chair. The only thing Rocky has left is his reputation and he is being asked to throw that away so kids won’t look up to him and his lifestyle. Rocky does just this at the last moment, a complete rejection of the gangster way of life.

While nothing can top the pure electricity that is Cagey in White Heat, Angels With Dirty Faces gets my spot as the next most interesting performance in his career. The Dead End Kids give Cagney an element to his performance few other actors would rarely get the chance to express, likewise his real-life friendship with Pat O’Brien is easily apparent on screen with their interactions. Humphrey Bogart also appears in a pre-stardom supporting role. Despite only appearing in several scenes he nearly succeeds in upstages Cagney with his enigmatic screen presence. Plus that kid playing a young Cagney at the beginning of the film is very eerily like him.

Socially conscience pictures such as this which came from Warner Bros really give an insight into the lives of the common folk of the time. A moment which always stuck out to me in Angels With Dirty Faces is the basketball game because it’s the only classic-era film which comes to mind which features a basketball game thus showing an activity from the 1930’s which is still popular today. Likewise, the movie also acts as a historical document for the lingo among inner-city youths of the time. The performances given by The Dead End Kids feels like an early example of method acting; no surprise when watching this that it was once referred to as Italian street acting.

Michael Curtiz is undoubtedly one of the greatest craftsmen of Hollywood’s golden age (after all, in this same year he directed one of the most perfect things ever created, The Adventures of Robin Hood). The movie immediately flaunts it’s very handsome production values right from the opening shot. The execution finale of Angels with Dirty Faces alone is a masterpiece of cinematography with its prominent use of shadows, bright lighting and tilted camera angles. Here Curtiz creates a criminal underworld which is hard not to get sucked into. We might not want to emulate gangsters but we can’t help but be fascinated by them.