The Black Watch marked John Ford’s first venture into talking pictures and as expected with talkies from 1929, the film’s dialogue is delivered at a snail’s pace as one actor will wait over a second for the other to finish before they themselves start speaking, creating many long gaps in the dialogue and making the film’s pace slower than it needs to be. This gives The Black Watch a disjointed feel while the film still uses title cards over establishing shots – a silent era holdover. Visually speaking, however, the production values do not let the film down with the craftsmanship to be expected from a John Ford picture. The sets and costumes are lush and there are plenty of grand and expressionistic visuals – ultimately the film succeeds in creating that sense of adventure.

The Black Watch is a loose adaptation of Talbot Mundy’s novel The King of the Khyber Rifles. The Heart of Darkness style story sees Captain King (Victor MacLaglen) of the Black Watch, 3rd Battalion, Royal Regiment of Scotland (“the descendants of highland chieftains who rallied behind Wallace and conquered under Bruce”) sent on a military mission during World War I to take out a cult leader in a territory not under British rule ahead of the northern frontier of British India near the Khyber Pass. The first portion of The Black Watch features a heavy emphasizes on military tradition with plenty of thundering bagpipe action to show off that sound technology, plus nothing beats some Auld Lyne Sang regardless of the movie. The Black Watch holds a number of parallels to the adventure film Gunga Din which was released 10 years later and also starring Victor MacLaglen in an Indian setting. 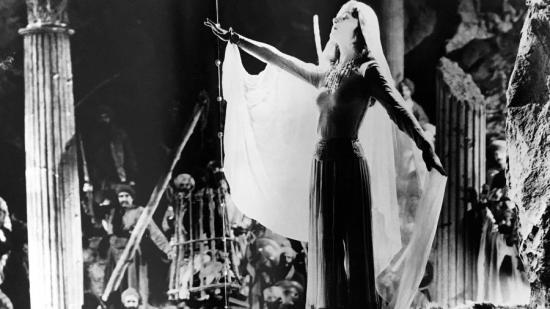 One of the main draws of The Black Watch is Myrna Loy in the spotlight role of Yasmani – Goddess to the natives (“others have been sent to take her out but never returned”). Observe the theatrical manner in which Loy moves her body alongside her hammed up pompous speech delivery, all while cloaked out in lavish costumes and surrounded in splendour and opulence. Yasmani claims to be a white woman descended from Alexander the Great, with Aryan blood running through her veins as she puts it. When she delivers a sermon in the cave of echoes she speaks of the prophecy that a woman of Alexander’s line shall find a mate and are destined to rule these tribesmen.

The identity of the cult in the film is not made clear. The film gives many indications the cult are Islamic extremists (there is no mention of the words Muslim or Islam) from members praying to Allah to proclaiming the murder of infidels and even the appearance of a flag with the Islamic Star and Crescent. However, in Islam you wouldn’t have a woman, let alone one of western origin at the head of a traditional Islamic movement. Likewise wouldn’t referring to Yasmani as a Goddess not go against Islam’s (and Abrahamic religions’ as a whole) monotheism? Not to mention the cult’s racial undertones raises many questions. I can’t deceiver if The Black Watch is a poorly researched movie or was intentioned to be deliberately vague?