The Whole of the Moon

The Moons Our Home is one of my favourite super obscure films with only 139 users ratings on IMDB as of writing this review and a proclamation from Bill Murray as one of his favourite films (look up his appearance on the Siskel and Ebert Holiday Gift Guide 1988 in which he mentions he would like a video cassette of the film for Christmas). The Moons Our Home has only recently seen its due on DVD on the Universal Vault Series although when I watched the film I had to access it through a torrent. Not the greatest image quality but as a big fan Margaret Sullavan and a Henry Fonda enthusiast I was overjoyed to get a hold of the film and was not let down in the slightest.

What surprised me about Margaret Sullavan’s performance as movie star Cherry Chester (real name Sarah Brown) is how much she reminded me of Jean Harlow, always changing mood within a split second. Sullavan and Harlow are two actresses I didn’t think I would ever compare so it’s fascinating to see this aspect of her screen persona I didn’t even know existed. Right from the beginning of the film Cherry Chester is screaming, throwing tantrums and acting like an all-round pretentious drama queen. There is even a Hepburn-esque quality to her character with her fierce desire to be independent as well as clothing choices of a turtleneck and trousers.

Henry Fonda’s role as the explorer Antony Amberton is very much the same as we are introduced to his character escaping from a group of screaming fans which he compares to his daring exploits from the jungles of Africa to the peak of Mount Everest like a male Greta Garbo. Also, notice how all his fans are giddy women, yeah I don’t think he’s exactly Roald Amundsen. Sullavan and Fonda had previously been married, making their pairing feel more tender and genuine with moments like their histrionics in the snow being as adorable as they are funny. The Moon’s Our Home also features innovative use of split screen in which Sullavan and Fonda are given half of the screen to represent different rooms in which they move in parallel and symmetrical tandem.

The other aspect which so effectively carries The Moon’s Our Home is all the great character actor moments with the likes of Beulah Bondi, Margaret Hamilton, and Walter Brennan as the hard of hearing justice of the peace; a brief but very funny role. However, I think the best of these moments involves Charles Butterworth as Horace, the man who is chosen by Cherry/Sarah’s grandmother as her arranged husband. This is despite in his many unsuccessful marriage proposals to different women. Listen to how mundanely and awkwardly he describes how he will “lift her off her feet” while being distracted by a game of solitaire. The Moon’s Our Home is full of moments like this which are funny on different levels.

It’s already a joy to discover a film I love, even more so when it’s a film that almost no one else will watch in a million years. It gives me the sense that it’s my movie. I guess this is what hipsters must feel like listening to bands no one else has heard off.

Errol Flynn, Olivia de Havilland and Rosalind Russell in a screwball comedy? These are the kinds of cast ensembles which unleash the inner fanboy in me. Errol Flynn rarely got the chance in his career to perform comedy and here he proves he was cable of doing Cary Grant-esque comedy on the same level as well, Cary Grant. Sadly Four’s a Crowd’s lack of box office success prevented Warner Bros from putting him in more comedies

Although The Women is seen as the film which launched Rosalind Russell as a fast-talking comedic actress, Four’s a Crowd is the first film in which she plays such a character and her first turn as the working career woman (or “newspaper man” as she refers to herself here) which became synonymous with shades of Hildy Johnson coming through. She takes full advantage of the role, stealing the show with her impeccable timing which reportedly made Olivia de Havilland envious. De Havilland though is tasked with playing a dim-witted character which she performs without coming off as annoying as such characters can easily be.

Four’s a Crowd owes a certain debt to Libeled Lady featuring some similar plot trends and themes with its slam on the upper classes, the socialite lifestyle and the desperate lengths newspapers will go to in order to get a story and control the narrative. Even the opening title sequence is taken from Libeled Lady in which the cast do the same arm in arm walk but is full of moments of inspired zaniness to distinguish itself. The model train sequence which lasts for 16 minutes had to have come from creative minds; plus what’s funnier in an innocent, cute kind of way than grown men playing with model trains. However, there is one moment in Fours a Crowd which is one of the most bizarre gags I’ve ever seen in a film in which after escaping from a pack of guard dogs to the other side of a gate, he grabs one of the dog’s legs and bites it. I still don’t know how to react to it, whether I should laugh or be horrified or both! The plot gets very confusing very fast but in a good way culminating in a finale in which Errol gets the wrong girl at the end! Although the manner in which this happens is screwball antics at its finest. 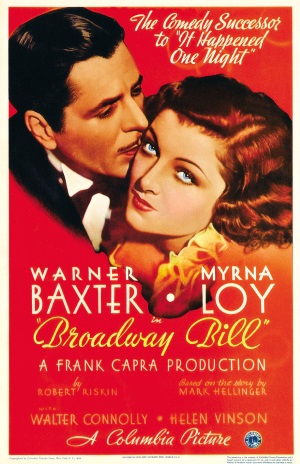 A Day at the Races

Broadway Bill is Frank Capra’s forgotten follow up to It Happened One Night, likely due to the film being out of circulation until the 1990’s and what a shame too. Warner Baxter and Myrna Loy are not romantic leads as she is his sister in law but both of them have great admiration for each other with Dan Brooks (Baxter) referring to her affectionately as The Princess and Loy clearly in love with the man and holding the same ideals as him but unable to go any further due to family ties; I find this dynamic is more interesting than a standard romance. Capra originally wanted Clark Gable in the lead role but had to settle with Warner Baxter who at least seems to be the next best thing as he holds much of the same rugged, footloose appeal of Gable.

Broadway Bill features many of the same Capra-isms as seen in his other films. The small town of Higginsvillie being run by business mogul J.L Higggins played by Walter Connolly is a much more light-hearted version of Mr Potter from It’s a Wonderful Life. He is in control of his entire family who run his individual enterprises and even their own national bank as visualised in a gag in which the entire Higgin’s family proceed to eat dinner in perfect unison. They’re not the Rothschilds but they’re wealthy and powerful (“Higgins, that’s not a family, that’s a disease”). Yet at the end of the film J.L. gets rid of his businesses or as he puts it, gives back institutions to the people who founded them. Like the Sycamore family in You Can’t Take It With You, Dan Brooks want to leave behind his life of work in favour of leisure and enjoyment, ideals comparable to the counter-cultures of the 1960’s. After all what could be duller than running a paper box company? Unless you’re Seymour Skinner.

One of the most pivotal scenes in Broadway Bill involves one of the richest men in the world, J.P. Chase putting a $2 bet on Broadway Bill at 100/1 as a means to pass time will in hospital. When word gets out it spreads like wild-fire and the claims of what the amount of money he placed on the best become exaggerated from $2 to $20,000 to $50,000 all the way up to a quarter million. Simple message – don’t believe everything you hear.

I love Broadway Bill for its simple cheerful Innocence. This is one of several films which has managed to tug my heartstrings over the fate of a horse. One plot element even involves the horse Broadway Bill refusing to race because he doesn’t have his pet chicken called Skeeter. You wouldn’t find this kind of innocence today in a film which is supposedly made for adults.