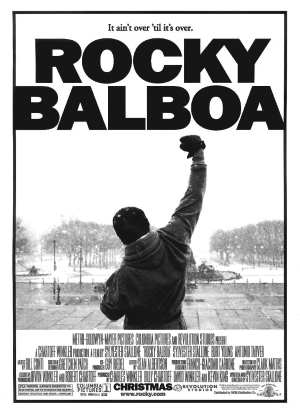 Rocky Balboa really does feel like meeting up with an old friend. The character himself is just as honest and done to Earth as ever, showing Stallone understands his own creation better than anyone else. So how do we make a Rocky film emotionally engaging right off the bat 16 years after the last movie? Have it revealed that Adrian died at some unspecified point (before 1995 at least) and that he is emotionally distant from his son along with a sprinkle of nostalgia in showing that he still has pet turtles (so are they the same turtles from the first movie?). Rocky Balboa doesn’t draw too heavily on little nods to the previous movies but a few are there. Rocky revisiting his old haunts really puts his journey in retrospect as he looks back on the ghosts of the past. More drastically, however, Rocky Balboa breaks the series tradition and has no recap of the final fight from the previous movie, setting itself up as its own separate beast.

In Rocky Balboa, the titular character is doing well for himself at least in terms of his standing in the community and even operates a restaurant named after his late wife. The real difficulty Rocky currently has in his life is the strained relationship with his son Robert (Milo Ventimiglia). Robert is ultimately a bit of a snob who is more intellectual than his father and works in a modern, geometric building (the Cira Centre); a world where the street weary Rocky doesn’t belong. Robert is clearly bothered by his father and doesn’t want to live in his shadow and only get ahead because of his last name. There is even a reference to the father-son relationship in Rocky V when Rocky uses the phrase “Home Team” to his son. See Stallone, even you can’t deny it exists (he actually gave the film a rating of “0” on a British talk show)

Like previous films in the series, Rocky Balboa draws comparisons to Stallone’s own life. The scene in which Rocky tries to convince the boxing commission to grant him a license feels just like Stallone trying to pitch the movie itself to a group of Hollywood executives; it’s true that Stallone didn’t have an easy time making Rocky VI. Even the reactions within the movie to the fight’s announcement echo the reaction to the movie’s announcement (“Rocky the President has labeled you a Balboasaurus”). I appreciate films about old age as they are few and far between (excluding Lifetime movies). – You can’t teach an old dog new tricks? Nonsense!

One of the weakest aspects of Rocky Balboa in my book is the largely forgettable opponent Mason ‘The Line’ Dixon. He is not over the top like Rocky’s previous foes and has no definable personality, memorable lines and has an RBF throughout the entire film. A more subdue villain could be interesting if done right but the script makes no attempt to do so. Honestly, his managers are far more interesting as a group of cynical, greedy boxing promoters. Although my biggest gripe with Rocky Balboa is the film’s visual appearance. The cinematography is way too overexposed and there is way too much blue in the colour scheme; I had to adjust my eyes in order to get used to it. – I will say Creed is far more visually asserting movie.

Burt Young makes Paulie grouchy and grumpy as ever and gives his best performance as the character, well in a deleted scene that is in which Paulie breaks down after losing his job after 31 years and speaks of how much he misses his sister. This has me screaming, “why wasn’t this left in the film?!” I get scenes have to be sacrificed for pacing but could they have not squeezed this scene in there? Oh well, that’s all part of filmmaking. Bringing back the character of Marie on the other hand, a one scene character from the first film is one of the best aspects of Rocky Balboa. I actually was fortunate enough to not know this going into the film and her reveal was a huge gasp moment. Likewise, the relationship between Rocky and Marie’s stepson named, well Steps presents an endearing generational difference. Rocky Balboa carries on what simply makes the Rocky films superb – great characters. Plus as with the rest of the series, there are many inspirational lines which I can add to my Rocky lexicon (“It ain’t about how hard you hit, it’s about how hard you get hit”). Even Duke’s “hurting bombs” monologue may be his greatest line ever, and that’s saying a lot.

The final fight in Rocky Balboa (which itself was inspired by a 1994 bout between a 45-year-old George Forman and a 26-year-old Michael Moorer) comes about because of a computer fight on ESPN. A “what if” scenario in which a computer determines who would win a fight between two contenders from different time periods; the premise sounds ridiculous on paper but surprisingly it actually works. The fight is by far the most realistic in the series up until that point. Thankfully the strive for realism doesn’t make the fight any less exciting than previous Rocky bouts. The fight is presented like it’s the real thing; it’s live on HBO, stats appear on the screen, its shot in HD and Michael Buffer is the presenter. The fight does transition from the live broadcast to a traditional movie presentation with some effective use of colouring in the black & white shots

Rocky Balboa is not my favourite film the series but how many franchises can say the 6th installment was this good. Where it certainly does succeed is in leaving the viewer with that uplifting Rocky feeling. In the final shot, Rocky visits Adrian’s grave and walks into the background disappearing into thin air, implying he’s passed on, or so we thought…