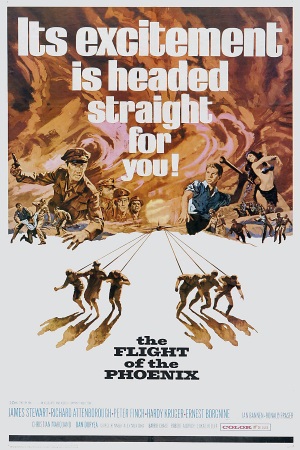 James Stewart’s career in the 1960’s was characterised by below average westerns, a contrast to his amazing run of diverse and ambitious films in the 50’s. The Flight of the Phoenix and The Man Who Shot Liberty Valance are the two films which broke this mould.

I’m not an aviation expert so I can only speak as a layman but the method in which the men escape from the desert by building a new plane out of the remains of their downed plane doesn’t feel implausible, even if the man who spearheads the project designs toy planes for a living. After Frank Towns (James Stewart) and Lew Moran (Richard Attenborough) learn that Heinrich Dorfmann does not actually design real planes he makes a convincing argument that the principals of model plane design are the same and in many aspects of models require much more exacting designs as there is no pilot to fly them.

Hardy Kruger is the big show stealer here as the reserved loner Heinrich Dorfmann. He doesn’t conform to the rest of the group often physically separated from them nor does he appear to care what they think of him. He is someone who deals in cold, hard logic and shows little emotion throughout most of the film until he finally warms up towards the end. The intense dislike Towns has for Dorfmann is never explained. Ok it is established Dorfmann gets on Towns’ nerves but the contempt he has for him is clearly something more than that; in fact, on my first viewing of The Flight of the Phoenix, I found myself puzzled as to why he was taking such a dislike to him. Although it’s never stated the dislike could be due to post-war bigotry. Although Dorfmann claims to have not been involved in the war he does hold some Nazi-like characteristics such as his lack of compassion for those unnecessary or hindering the survival of the greater good (the greater good!), not to mention the blonde hair and blue eyes wouldn’t help Towns’ perception of him.

It’s no secret that James Stewart was an aviation enthusiast, thus no surprise this role would have appealed to him. As a pilot during the war he brings an extra degree of levity to the role, however, this is no nice guy Stewart. Frank Towns is a man with a violent temper – nor did Stewart ever appear in a movie with a face so beat up (kudos to the makeup department for all those nasty looking side effects on the character’s faces.). The shot in which he threatens to kill the unknown person stealing water if they do it again as his face goes in and out of the light more than once is intimidating stuff. Likewise, The Flight of the Phoenix is piloted by a superb international cast with characters whom have different levels of adjustment to surviving the wilderness. It’s a surprise seeing Dan Duryea playing a softie as Standish the account; a total contrast to his other roles as a no good weasel.

“The little men with the slide rules and computers are going to inherit the Earth.”