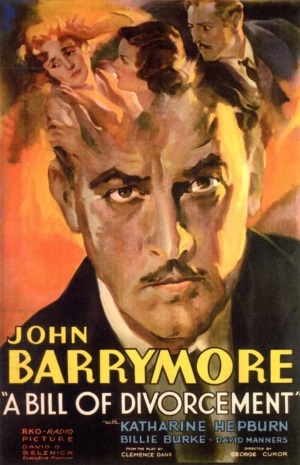 A Star Is Born

Katharine’s Hepburn’s screen debut proved to be a stronger film than I expected, starring alongside the great John Barrymore in this tragic mental illness melodrama and when I say tragic, I do mean tragic. Boy does this movie lay it on thick but it sure made this viewer’s hear sink. Even before Barrymore appears on screen I was already starting to feel sorry for this character upon learning he’s spent years at a mental asylum with shell shock and couldn’t pursue his music, and that’s only the beginning. You know that dirty word people like to throw around, “manipulative”; well this movie certainly manipulated me. Yet despite the story laying additional tragic layers after another, the performances make it work and prevent it from coming come off as totally ridiculous.

Watching Katharine Hepburn I would never have guessed this was her first film, she is entirely natural and gives the impression of someone has much acting experience. Plus she was never more youthful than she is here, springing full of energy and life. Supposedly director George Cuckor inserted shots in the film which did nothing to advance the story nor deepen character but were simply lingering shots of Hepburn in which the audience could adjust and get acquainted with her.

John Barrymore, however, is the main star of the show. Throughout the film there is a sadness and fragile nature of his voice while he denies the reality of the situation to himself and pulling the puppy dog eyes; with the occasional scenery chewing outburst. He’s a ham but a lovable ham. I feel the most powerful moment in the film is the scene in which Barrymore breaks into tears into the arms of his neglectful wife (Billie Burke) while she can’t even bear to look at him; I almost broke into a tear myself.

I’ve read many comments describing the film “stagey” – not at all. Shots are framed with depth, often at different angles and with objects framed in the foreground; George Cukor was a better director than that. A Bill of Divorcement is a heart sinker if there ever was one.