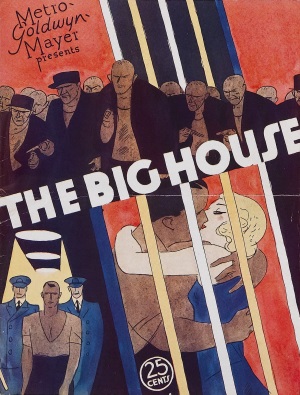 You Know What They Do To Guys Up At The Big House!

I suspect The Big House helped birth many of the conventions, staples and slang terms which have come to define prison films. Many of the classic elements are here but they manage to feel fresh instead of coming off as worn out clichés.

The big impact this film had for me was that it made me a fan of two of its main stars, Robert Montgomery and Wallace Beery. The Big House made Beery a star, establishing his loveable lug persona and making him one of the biggest stars of the early 30’s and one of the most unconventional stars in Hollywood history. Beery has a contradictory screen persona as seen here as his role of Butch; a thuggish brute one minute but as gentle as a puppy the next. However, I feel Robert Montgomery is the one who steals the show, even If he doesn’t have as much screen time as Beery and Chester Morris. Montgomery strikes me as the most interesting character in the film, as a privileged pretty boy convicted of manslaughter while drunk driving; he appears to be barely ready for adulthood, let alone ready for serving 10 years in prison. Throughout the entire film, you can tell he’s completely out of his element with his trembling manner and naive wide-eyed stare. Unlike the rest of the prisoners, he is not a criminal in the common sense, displaying how it’s a scary possibility for any regular person to end up in prison regards of their background or social standing.

Being an early talkie, The Big House features many long static camera shots, muffled sound and no background music. However, I feel these technical limitations are one of the film’s greatest assets as they heighten the claustrophobia of the cells and other confined areas of the prison. If The Big House was made or remade later in the sound era with more advanced cinematography and clearer sound and a music score, it would not be as effective. The sound design itself is impressive, with the sound effects of whistles, prisoners marching or turning their plates in perfect unison in the mess hall showcase the routine nature of prison life and its mundanity.

The film’s screenwriter, Frances Marion interviewed actual prisoners and prison personnel when writing The Big House, making the film an as authentic as possible look at the American prison system in 1930. Director George W. Hill apparently threatened to fire anyone caught acting and forbade the use of makeup in the film. The sets don’t look like Hollywood sets and this is not a romanticized look at prison such as movies like Ladies They Talk About. At the beginning of the film the prison’s warden (Lewis Stone), delivers a monologue about the general public wanting criminals locked behind bars but don’t care about their treatment or rehabilitation once in prison. Here the prisoners have nothing to do all day in the overcrowded prison but grow animosity towards the guards and plot on how they are going to make their escape. Shortly after watching The Big House, I heard a discussion on the radio regarding the deteriorating conditions of prisons in the UK in 2014 and a caller phoned in and mirrored the exact points Lewis Stone made in The Big House; 80 years later and nothing has changed.