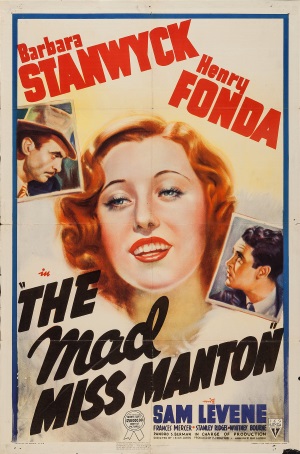 Melsa Manton (Barbara Stanwyck) and her ilk of rich, bored socialites use Manhattan as their playground similarly to the wealthy socialites in My Man Godfrey, using the city for bizarre escapades such as sleuthing in the middle of the night and all while still dressing to impress at the same time in The Mad Miss Manton. Stanwyck’s enthusiasm alone is infectious and the quick-fire interactions of the girls are one of the film’s highlights (“I was never much of an individualist, if the upstairs has to be searched we search it together – why that’s communism!”). They even partake in a number of Scooby-Doo like moments, in particular actions reminiscent of the character Shaggy, i.e. making a sandwich in the kitchen when sleuthing in a trespassed apartment. The other memorable addition to the cast is the sarcastic, wisecracking Hattie McDaniel who takes no nonsense from anyone and has a comeback to everything despite her socio-economic status (“Comes a revolution and we’ll start being exploited by our help”).

Barbara Stanwyck and Henry Fonda – one true pair if there ever was one. Their chemistry makes it more believable that Peter Ames (Fonda) with his dorky bow tie would fall head over heels for this spoiled Park Avenue princess who is trying to sue him for a million dollars over an editorial. He is even driven to the point in which he casually imposes marriage on her. Henry Fonda isn’t given enough credit for his comic abilities, in particular, the scene in which he fakes his own deathbed in order to extract information from Miss Manton. In one scene Fonda is even seen holding a knife, in the same manner he would years later in 12 Angry Men.

The Mad Miss Manton was one of many films throughout the 1930’s which attempted to get a piece of that Thin Man pie. The formula of the 1934 comedy-mystery romp was an effective one and could easily be recreated with low budgets. It doesn’t matter that the mystery in The Mad Miss Manton is incomprehensible. The comedy and the atmosphere are what makes the movie, of which the picture succeeds in creating with the high contrast, film noir-like lighting during the sleuthing sequences (especially with the sequence in the subway) even though the film is visibly a low budget production.