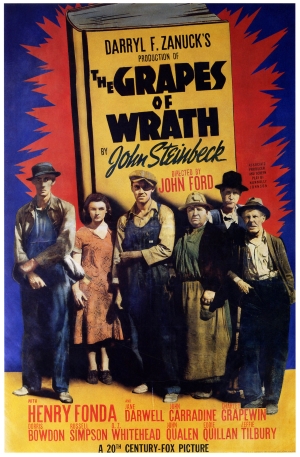 California, Super Cool To The Homeless

The Grapes of Wrath was impressively released less than a year following the release of the novel and yet within this short timeframe director John Ford crafted one of the greatest motion pictures ever made. A number of John Ford’s movies have that foreign film feel – a feeling of very raw, lifelike emotion. The Grapes of Warth itself is one of the most emotionally draining films of all time with one scene after another drawing up such feelings of pity; everything is rough, dirty nor is there makeup on any of the actors. Just take the scene in which the depression-ridden Joad family on their way to California attempt to buy bread from a dinner (a scene which really puts the value of money in perspective) – The emotion is one part humility and the other part pathetic.

Yokels, rednecks, hillbillies – everyone’s favourite punching bag. The Grapes of Wrath doesn’t look down America’s uneducated, rural white folk nor presents them as a caricature but that still doesn’t change the fact that none of the Joad clan are the sharpest tools in the shed nor don’t understand how the outside world works. Just as we are introduced to the family the youngest daughter Rosasharn is pregnant and married when still a teen while the family is dirt poor and huge as it is.

Henry Fonda’s performance as Tom Joad may be the pinnacle of his acting career. His stone face alongside the laid-back manner in which he walked and talked is mesmerising yet Joad is not someone I would fancy being in the vicinity off. Fonda’s performance has a sinister edge to it and a sense of barely restrained violence. His proclamation to the truck driver near the beginning of the film when telling him the reason he was in prison, a simple uttering of “homicide” could come straight out of a horror movie. Jane Darwell on the other hand as Ma Joad is the other great scene stealer with her hauntingly sombre, tour-de-force performance as a character with one ultimate aim – keeping the fambly together.

The amazing landscape shots, use of German expressionism and high contrast lighting give way for such unforgettable images from a car light driving along the horizon to silhouettes walking across a hill, thanks to cinematographer Gregg Toland. Take the scene at the campsite in which the characters discuss their present situation; it’s so dreamlike with the odd, unnatural angles, it couldn’t be more mesmerising. I also recommend watching the South Park episode Over Logging which parodies this scene (and the movie as a whole), right down to the black & white cinematography.

Once the Joads arrive at the Farmworkers’ Wheat Patch run by the Department of Agriculture it is a temporary relief to see something good happen to the family, after all, they have been through. When The Grapes of Wrath was released in 1940, the US Secretary of Agriculture was Henry A. Wallace, whom that same year was running for Vice President with Franklin D. Roosevelt; a message of support for FDR and the New Deal no doubt? At the government camp they are greeted by a seemingly genuine, honest man who looks like FDR and tells them they have washtubs with running water; a world away from the corporate run camps the Joads took residence earlier in the film – all sounds too good to be true? The government is the solution to the Joad’s problems (temporally at least as they end up leaving at a later point), nor at any point in the film do we see any charitable organisations out to help the poor. It’s fairly obvious that The Grapes of Wrath doesn’t exactly lean to the right of politics; evil bankers running people off their land, corrupt police, capitalists treating people like dogs, total collapse of the free market, socialist camp run by the government is only decent place to be in which cops are not allowed to lines of dialogue such as “people are going to win rich, people are going to die”. – A world of oppressor and the oppressed if there ever existed one. Regardless of one’s politics, I still contend The Grapes of Wrath to be one of the most emotionally draining films in all of cinema.