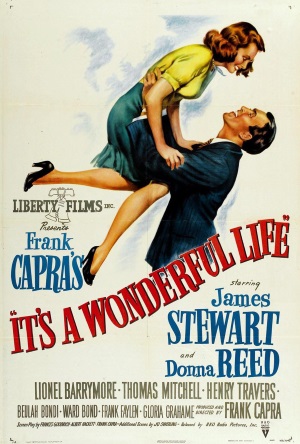 It Happened One Christmas

Why yes I do cry like a baby over it’s a Wonderful Life: every time. That ending is such a huge release after such as a dark and depressing alternative reality. I’m always left shaken up by it and need a break before I can watch another movie as well as making me want to make amends with loved ones. I’m sure everyone who watched It’s a Wonderful Life thinks to themselves what the world would be like if they were never born. The struggle of George Bailey is relatable to a wide spectrum, and I know for myself it really hits home. Being stuck in a dead-end town and feeling you will bust if you don’t get away from it; having your life not going the way you intended it to while your siblings appear to be doing so much better than you. But in at the end George Bailey realises what he’s got when it’s all gone, above it all, God’s greatest gift. It’s a Wonderful Life takes placed in a world in which God exists (and can focus his time on this one person over the rest of the world, but I digress). I’ve never felt however for It’s a Wonderful Life to have a religious agenda, it’s merely just a plot device for the film’s fantasy elements.

Lionel Barrymore’s performance as Henry F. Potter I feel is a tie between his brother John’s roles in Twentieth Century as the best performance from the Barrymore clan. Potter is one of the biggest douche bags in movie history; the archetype evil business mogul and ripe for comparisons with real-life figures. Not only has he no charitable side, he directly steals money in order to destroy his competition. Unlike other screen villains, Potter does not get any comeuppance at the end of the film, although you could say he’s destiny as a sick, frustrated and lonely man who hates anyone that has anything he can’t have is punishment enough. Potter isn’t a total caricature though, he is more three dimensional than that. He’s a man who knows how to conduct and run a business and understands that high ideals without common sense could ruin a town. But George Bailey is no fool, he is a natural born leader, even if he doesn’t realise it. He stands up to Potter without giving it a second thought, runs a building and loan which is a real estate empire itself; even his father states to him that he was born older than his brother.

Moments like the makeshift honeymoon suite in the broken down house which they later make their own or the recurring gag with the mantle at the end of the stairway represents the kind of writing which elevates It’s a Wonderful Life above the majority of other movies. Like the greatest of films, you notice something new on every viewing. Likewise, nobody can do moments of intimacy like Frank Capra, the movie is full of scenes in which it is simply two actors talking with no background music, yet creates raw human emotions like no other. Take a scene such as George and Mary walking through a neighbourhood at night while George talks about his ambitions for the future, the rest of the world ceases to exist. Many will be quick to put down Capra’s work as so-called “Capracorn” or as Potter puts it, “sentimental hogwash”. Get off your high horse and stop thinking you’re above such emotion – cinema is about the manipulation of emotions.

It’s hard not to feel sentimental for the representation of small-town America on display. Bedford Falls itself is a town full of interesting and unique characters. It actually reminds me of The Simpsons. Potter himself is essentially the town’s own Mr. Burns in The Simpsons – the people of Springfield hate Burns but are dependent on him for their energy needs. Likewise, the people of Bedford Falls hate Potter and would be dependent on him for their housing if it wasn’t for the competition of the Bailey Building & Loan.

Due to its public domain status, the film was shown on some TV networks in 24-hour marathons. I’d happily watch one of those networks as I can’t stop watching It’s a Wonderful Life no matter what point in the movie I begin. Could you get a more perfect marriage between actor and director than James Stewart and Frank Capra? Collaborating on a perfect trilogy of films, with each one better than the last. It’s a Wonderful Life? It sure is. 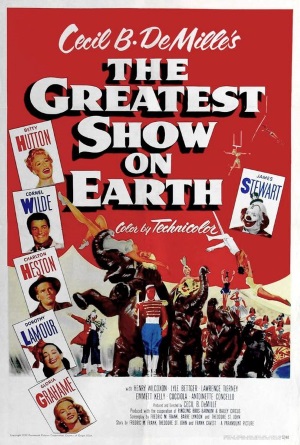 The Show Must Go On

The DVD release for The Greatest Show On Earth plays down its Academy Award win for Best Picture. Hang on, isn’t this supposed to be the highest accolade in the film world? Why would you downplay that your film won the award?  I guess Paramount are fully aware of the film’s reputation as one of the “worst Best Picture winners”. I normally have a rule when reviewing movies not to mention the Oscars because I feel it is so redundant to do so. “How did this beat ‘x’ picture?”, “Why didn’t ‘x’ get an Oscar nomination?” – such tiring statements. I believe Best Picture winners attract viewers to a film which they would unlikely watch otherwise and because of this many films get a bad reputation as “the film which beat such and such for Best Picture”.

The Greatest Show On Earth is one such film, made out to be worse than it is due to attracting an audience who would otherwise never watch it if it wasn’t for its Best Picture win. The Greatest Show On Earth is tons of fun; at times I had a carefree feeling that I was at an actual circus (minus the smell of elephant dung) with actual circus equipment being used for the movie’s filming. The Greatest Show On Earth beautifully captures this un-PC relic of another age (“you mean we all got to play in blackface?”) full of clowns, animals in captivity and human freaks. There is even an appearance of performers wearing costumes of Disney characters; good luck trying to put that in a non-Disney film nowadays! Likewise, the acrobatic scenes are suspenseful and you really get a sense of the scope and awe; the whole thing even feels like it has weight to it so I can forgive the odd jumpy edit. – The film packs a lot of material and dramatics into its runtime and I felt like I got my money’s worth.

You could look at The Greatest Show On Earth cynically and say it’s a commercial for Barnum and Bailey, well it’s a very entertaining commercial at that and a very informative one offering a documentary-like look at how the circus operates with the guidance of DeMille’s passionate narration. This was a change of pace to DeMille’s usual fare of historical and biblical epics but he still manages to throw some Christianity in there with the scene in which a priest and his Alter boys bless the circus train before it begins its season.

Tasked with Herculean effort of running a circus, you couldn’t get a more commanding choice than Charlton Heston in the Clark Gable type role as a man under great pressure to keep the operation running and pull the strings behind the scenes; not even a train crash or near-death deter him from putting on a show. However, when your movie stars James Stewart (albeit a supporting performance), isn’t any surprise he’s the best aspect of the film. I believe his role of Buttons the Clown is an underrated performance of his and one of his most tragic. He has a permanent smile on his face (really, his makeup never comes off at any point), yet has a dark, troubled past. Yep, it’s obvious symbolism but you can feel his pain throughout thanks to his quiet, subtle performance. As the movie progresses it takes a surprisingly dark turn, not only with the shockingly intense train wreck sequence (which really set a standard for special effects) but also the implication that Buttons, a former doctor had assisted his wife to kill herself. It’s very subtly implied but it’s still surprising that a mainstream blockbuster would have an assisted suicide subplot in an era dictated by the censorship of the Hay’s Code.