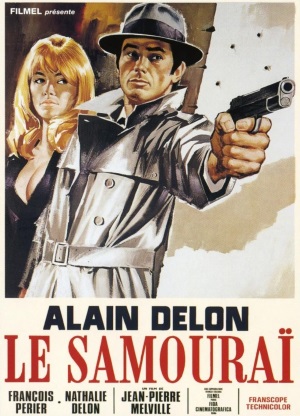 Don’t Shoot Me I’m Only The Piano Player

Alain Delon is Le Samouraï – hitman Jef Costello – cold yet elegant and graceful. The ever badass Delon could be identified by a silhouette of his figure. While he has those Humphrey Bogart vibes with his grey trench coat and fedora, he possesses a demeanour that’s strictly his – this is a man who knows how to wear clothes. Moreover, there is an ethereal beauty to Delon which straddles that fine line between masculine and feminine beauty with a face that conveys so much without the uttering of a single word.

Jean-Pierre Melville’s Le Samouraï is a master class in how to make a film with long stretches featuring no dialogue with little-to-no music. When music is used, however, the haunting score by François de Roubaix with its use of hammond organs mixed in with some sections of mellow jazz is the perfect match for the grey, rainy streets of Paris (this is the kind of music you need to play when walking down an empty city street in the early hours of the morning). There is a real hypnotic quality to watching Alain Delon making his way through this urban jungle. The Paris featured in Le Samouraï is not the Paris as would be portrayed in an American film in which the Eiffel Tower and Arc de Triomphe is included in the background of every shot. Rather this is a Paris of grimy, urban locales – a real-time capsule of the city circa 1967. The locales and interiors featured in Le Samouraï make it a film that oozes class. I’ve never seen a classier looking nightclub than that featured in the film with its silver and glass décor while even the interior of the cold and sterile police station has an art deco appearance to it.

I’ve read many of my fellow film reviews heavily critique Jef’s decision making in his criminal activity as a major dent in the believability of Le Samouraï. When carrying out his hit, Jef enters Martey’s nightclub wearing a distinct outfit, he returns to the scene of the crime the following night (despite his arrest from the previous night) and even disposes a set of blood-soaked bandages on the ground outside his apartment, knowing that the police are surveilling him. Yet, such clumsy actions strike me as being a sign of Jef’s overconfidence rather than a mark of poor writing.

Le Samouraï can rank as one of the best police-procedural films. It makes for fascinating viewing to watch the techniques deployed by the police for identifying and questioning suspects, as well as their methods for tracking Jef through the Paris subways with a cat & mouse chase in a pre-internet, pre-mobile phone, pre-CCTV world. Le Samouraï also shows how the French citizenry is required to carry identity papers, an anathema to viewers in the anglosphere (the requirement to carry identity papers is a holdover from Roman law, unlike English common law where no such requirement exists). Within the film there are no Miranda rights as seen in American films but more worryingly, the police stalk Jef and put him under 24/7 surveillance, break into his apartment to install a bug as well as breaking into the apartment of his girlfriend and attempting to coerce her (also take note of how the commissioner turns a picture of a baby on his desk away from sight after questioning a suspect). There are however objections raised by suspects throughout the film when the police begin asking questions about their personal lives. If Le Samouraï is conveying a negative portrayal of the police, it may to conveyed most harshly but subtly with a blink and you miss it moment with a cut 50 minutes into the film in which a crime boss walks from right to left and then cuts to the police inspector continuing to walk in the same direction in perfect motion. Both bodies have the same aim of wanting to catch Costello but is the film also trying to say they both are as morally and ethically bankrupt?

Throughout Le Samouraï as Jef returns to his apartment, the sound of a caged chirping bird plays repeatedly without the aid of any music. As would be heard the proceeding year in Once Upon A Time In The West, the use of a recurring sound is shown to be as memorable and effective as a great score (I can also attain that every time I have watched Le Samouraï, the chirping bird has garnered the attention of my cat). The bird even serves the plot as Jef shares an almost telepathic relationship with the avian, as when Jef has returned to the apartment to find the bird traumatized and shedding feathers, he starts exploring his apartment only to find he has been bugged.

Le Samouraï opens with a quotation from the book Bushido: The Soul of Japan – “There is no solitude greater than a samurai’s, unless perhaps it is that of a tiger in the jungle.” However, this quote is entirely a creation of the film and not taken from said book. How much of actual samurai mythology is present in Le Samouraï or is the film just trying to look a bit cooler with a westernized interpretation of what a samurai is? Regardless, the film earns its merits in so many other regards I can easily look past such a thing.