We’re No Angels was Michael Curtiz’ second Christmas film in a row (despite its release date of July 1955), although unlike White Christmas, We’re No Angels is a less secular affair with its use of biblical references in the tale of three, perhaps not so wise men who bestow gifts on a distressed family at Christmas. We’re No Angels is both sentimental and darkly comic as the Ducotel family in a French colonial town on Devil’s Island (despite none of the cast appearing remotely French) are not massively bothered by having three escaped convicts stay at their adjoining home/business. The three disreputable men go to the Ducotel household intending to rob them but end up getting caught up in the spirit of the season after having a voyeuristic insight to the troubles bestowing the family and their failing general store. We’re No Angels is a bright and colourful affair with the scenes in the bustling port town in particular showing off Curtiz’ directorial skills. The picture even calls to mind Larceny Inc (1942), another film in which a group of criminals inadvertently turn around a failing business.

A large portion of the film’s dark humour comes from Aldo Ray alone in the role of Albert, a sexual offender type convict of whom we don’t know the extent of his activities but the movie hints that it ain’t pretty. Much of the film involves him having an attraction and interacting with the family’s daughter Isabelle (Gloria Talbott), including pinching her derrière and carrying her fainted form into her room with the door closed – once again, the family takes no objection to this. Likewise Isabelle appears to have a serious medical disorder in that she faints multiple times in a short period and even has an unrequited love for her second cousin. Contrasting the more lowly and thuggish Albert is Peter Ustinov as the eloquent and well-spoken Jules. His technique of cracking locks and opening safes involves him lightly touching the outside of a device and then bumping the side of his hand lightly against said device, resulting in the hatch opening – is it this simple in real life or is the movie playing loose with safe and lock-cracking techniques?

We’re No Angels was Humphrey Bogart’s big career opportunity to show off his eccentric comedic side as the con artist Joseph. Bogart was able to display his comic chops in All Through The Night, however, We’re No Angels is more in the vein of The Marx Brothers – just look at the scene in which Joseph successfully cons a customer into buying a suit which is clearly several sizes too small for him. Bogart’s facial expressions and body movements accentuate the performance and even the sight of the tough guy cooking in a kitchen wearing a pink apron somehow doesn’t degrade his machismo. Likewise, Bogie also delivers one of the funniest lines among the pantheon of great Bogart quotes:

“We came here to rob them and that’s what we’re gonna do – beat their heads in, gouge their eyes out, slash their throats. Soon as we wash the dishes.”

Basil Rathbone on the other hand, the Hollywood embodiment of villainy portrays an Ebenezer Scrooge type role as Andre Trochard, the business owner who sees no objection to doing labour on Christmas Day nor having no concern for people’s humanity, just business. We’re No Angels bounces back and forth from zany jokes to more deadpan humour such as the trio’s very slow, drawn-out debate on who should tell Andre not to open the box with their pet snake named Adolf in it. The humorous ending in which the three decide to return to prison was likely brought about by the production code forbidding criminals to be portrayed as sympathetic characters thus their redemptive conclusion – an example of finding a clever solution within the confines of censorship. 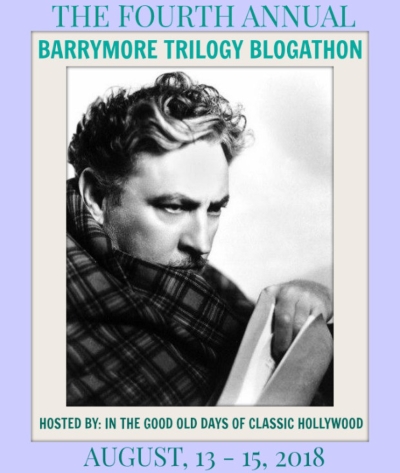 Here’s To You Ahab!

I have never read the novel Moby Dick although I am informed this adaptation has very little to do with its source material. The film does open with a shot of the novel itself, however, the screen dissolves into the first paragraph of a Chapter 1 which does not exist in the book nor contains the famous line, “Call me Ishmael” (a character who also does not appear in this adaptation). Yet even to judge Moby Dick from 1930 on its own merits this is a flawed film but has enough good in it to make it enjoyable; although it is a shame as all the ingredients are there for the making of a classic. Oh whale, what can you do?

John Barrymore’s performance is unlike my perception of Captain Ahab and also differs from Gregory Peck’s Lincolnesque performance from 1956. This Ahab during the first half of the film is a womanizing, carefree rapscallion who even exudes sexuality at times. What’s striking about Ahab’s introduction are his acrobatics atop of a ship’s mast. While some shots are clearly performed by a stunt actor, those involving Barrymore really gave me the Gene Kelly vibes, specifically of his performance in The Pirate (1948). Even his voice is reminiscent of Kelly when he shouts “Look out below!”. In the latter half of the film, we see the Ahab more identified in pop culture as a bitter, vengeful man once Moby Dick robs him of a leg. Nothing beats Barrymore hamming things up and in one scene we even see him wearing a cape and strutting like he did in Dr. Jekyll and Mr. Hyde.

Ahab’s relationship with his brother’s finance Faith (Joan Bennett) is an endearing bit of adultery as established in a cutesy scene taking place in a church in which they bond thanks a trusty Saint Bernard. The other real striking presence in the film is Noble Johnson as Queequeg, of whom Ahab humorously refers to as a heathen throughout the film.

The structure and pacing of Moby Dick is rather flimsy. The landlocked portions of the film, for example, leave me wanting to get some sea action. Likewise, the sequence of Ahab’s ship navigating through a storm is visually impressive but didn’t have to be as long as it did, plus it’s hard to make out much of the dialogue amongst the sound of the storm.

One of the film’s big positive’s are the production values from the rich details of the port, the seedy taverns and even full-scale ship recreations – all contributing to the film’s downtrodden atmosphere ( we are even given a sequence amongst an exotic Asian port in Singapore). The special effects, on the other hand, are mostly good for the time, all except for one extremely poor close up of Moby Dick during the first encounter in which the little mouth of the beast is seen moving. It only appears on screen for a mere second but looks poor enough that it sticks in your mind. Historical adventure pictures were not common during the pre-code era. After being abundant during the silent era they wouldn’t make a comeback in Hollywood until the mid 30’s so it is interesting to see a picture of this nature made in 1930.

Details on this film’s background are not abundant. It wouldn’t surprise me if Michael Curtiz directed any scenes (he did direct the lost, German language version) due to two scenes featuring the unmistakable use of Curtizian shadows. – But for now, I can only speculate. This brings me to my next point; the changes in image quality in the Warner Archive print of the film. Much of the clarity of the image quality is above what you would expect for a film from 1930, yet other scenes are of a much-degraded nature. Even more bizarrely in some scenes, the brightness levels between shots are very inconsistent. Is this the fault of the filmmakers, the print or where portions of this film lost at one point? Whale we ever know?