The Sweet Smell of Success

The Coen Brothers are hit and miss with me (I tend to have a preference more towards their comedy then their drama) but The Hudsucker Proxy is by far my favourite movie of theirs, a film which feels like it was tailor made for me. The Hudsucker Proxy takes place in its own unique universe; the acting style in the film is reminiscent of the 1930’s yet the film is set in the 1950’s. Likewise there appears to be a clash of fashion; the outfits are from the 30’s yet the cars or the beatnik coffee house which Norvillie visits are unmistakably 1950’s but I like this combination of two eras, two distinct time periods of Hollywood’s golden age wrapped into one. The Hudsucker Proxy is a movie with so many layers and homage’s to other movies (Sweet Smell of Success, Metropolis, The Apartment, The Producers, various Frank Capra movies); I’m sure with future viewings I will unlock even more secrets the movies holds.

The Hudsucker Proxy is a love letter to anyone who loves the aesthetic of classic Hollywood movies with set designs to die for such as Paul Newman’s office, an art deco fantasy land; yet the movie even injects some Terry Gilliam-esque cinematography with the scene in the mail room feeling like the world from 1985’s Brazil. Likewise this is a movie of drawn out colours, mostly greys in what I feel is an attempt to emulate the appearance of black & white.

What happened to Tim Robbins? He was on such a hot streak of films during the first half of the 90’s, just after this he was in The Shawshank Redemption (one of the best two film streaks ever?); since then, not so much. The character of Norvillie Barnes is a Preston Sturges hero trapped in a Frank Capra story; although due to Robbin’s resemblance to a young Orson Welles the character comes off to me as someone who has the look of Welles but has the personality of Gary Cooper; a young entrepreneurial go getter with a wide eyed innocence who is not fully in tune with reality, or at least hasn’t been subjected to it yet. When he first arrives in New York and tries looking for a job, the word “experience” is plastered all over the frame, oh the reliability.

Jennifer Jason Leigh is a revelation here; channelling Rosalind Russell, yet I can still detect elements of Katharine Hepburn, Barbara Stanywck and Jean Arthur in there. The coordination of her gestures is perfect and I’m also fascinated by her character dynamic in which she becomes insecure about her femininity or lack therefore off at Norville’s comments of her trying to be one of the boys. Although it’s never resolved, this still gives her character another layer of depth. Paul Newman on the other hand rarely ventured into comedy but he pulls of the cigar chomping, “you’re fired!” type boss with ease.

The film’s combination of numerous elements from various genres is also carried over in its humour, from dry jokes to more overt, fast talking screwball antics. The gag with the circle drawn on the piece of paper followed by the uttering of “you know, for kids!” never gets old, even if the movie’s poster somewhat spoils the joke. While the sequence detailing the creation and distribution of the Hula Hoop, I don’t think I could you ask for a better fast paced quirky montage. Likewise the (almost literal) Deus Ex Machina ending could have easily come off as a copout but I feel is rescued from being so from the plot element of the blue letter; I completely forgot that even existed until the angel of Warren Hudsucker reminds a suicidal Norville about it; now that’s a sign of an engaging film.

A Different Kind of Stockholm Syndrome

The Prize is my second favourite Hitchcock film he didn’t direct (my favourite being 1941’s All Through the Night). It’s not instantly engaging from the start as there is a lot of setting up to do but becomes more and more tense as the film progresses. In classic Hitchcock fashion, once the mystery kicks in your left scratching your head wondering if the protagonist just paranoid or is something fishy really going on.

I consider The Prize one of Paul Newman’s best films, giving him the opportunity to show off his not often exposed comedic chops. Newman is one of few select actors in which I can ask the question, “honestly, who doesn’t like Paul Newman?”; does there exist a more likable screen presence?  Likewise, Edward G. Robinson’s role is reminiscent of his part in The Whole Town’s Talking, playing a dual role of characters identical in appearance but with polar opposite personalities; while the hotel setting rings a bell of MGM’s own Grand Hotel some 31 years prior. plus when you set your movie in Sweden it seems inevitable that someone will mention Greta Garbo along the way. Hitchcock himself also never fully took advantage of the cold war. Torn Curtain, although I do think is underrated, is imperfect while Topaz is one of his dullest outings. It’s satisfying to see a superb Hitchcockian thriller with a plot about West vs. East.

North By Northwest has the auction scene in which Cary Grant makes a fool of himself to get caught by the police in order to get away from the bad guys; The Prize has the same scene but ups the ante with having it taking place during a nudist meeting and of course naturally of all the countries in the world to a nudist meeting, where else but Sweden. The Prize is not quite Hitchcock’s greatest hits but it’s the closet a film comes to being so. There are other allusions to other Hitchcock films including The Lady Vanishes, Foreign Correspondent, Saboteur, and Torn Curtain. Hang on, that one didn’t come until three years after this movie. Huh, was Hitchcock inspired by this Hitchcock clone/rip-off/ homage/whatever you want to call it. As far as imitations of someone else’s work goes it doesn’t get pulled off any better than this. 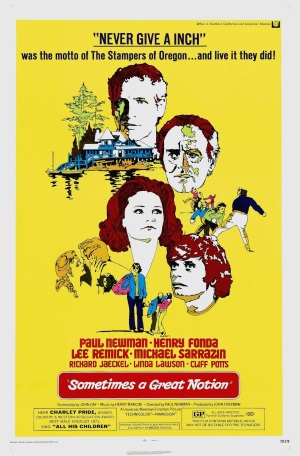 There is no overarching plot in Sometimes a Great Notion yet I was still engaged with the life of this family with their ongoing effort to try and make a living and their own family dilemmas all occurring among the beautiful forest scenery of Oregon. This is a man’s movie reminiscent of the male bonding films from Howard Hawks such as Only Angels Have Wings and Tiger Shark.

Henry Fonda plays a character called Henry so I like to imagine his interactions on set with Paul Newman occur just like they do in the movie. I’ve also often championed Henry Fonda’s unsung abilities as a comedic actor and here he provides the film with some great moments of comic relief. Michael Sarrazin gives the most interesting performance though as the girly man Leeland Stamper who doesn’t fit in with the rest of the men largely due to his long hair. There’s a quiet confidence to his character though as he is unbothered by the remarks of the other men and eventfully wins their respect, by how? Winning a game of the ever manly sport of football.

The logging scenes themselves are actually quite suspenseful, seeing men who are putting their lives in danger in order to make a living, you’re expecting someone to get injured or killed at any time and that brings me to scene in the film which left the greatest impression on me. There are two death scenes towards the end of the film. First, there’s Henry Fonda’s death which is sad, itself but that is but nothing compared to the death of Richard Jaeckel; I was thinking about this scene for days after watching the film and it’s even more powerful watching it a second time as I’m waiting in dread for the scene to arrive. For starters, the character is trapped under a log while the tide is slowly rising and he spends the whole time joking about it and when he is eventually submerged in the water he can only stay alive through constant mouth to mouth resuscitation until help shows up to move the giant log. I can’t imagine a more terrifying situation a person could be in; you can possibly get rescued and live but in order to do so you must remain completely calm; one mistake and you’re a goner. This one of the most harrowing things I’ve ever seen in a film. I doubt I will ever see a more intense death scene or one so difficult to watch.