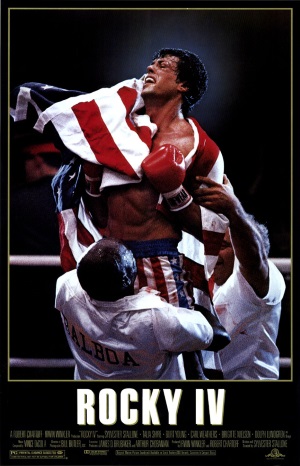 Rocky IV is one of the most entertaining movies ever made. If there was ever a movie I can turn to for just 90 minutes of pure, immense, adrenaline filled, inspirational entertainment, it’s Rocky IV. The runtime is the shortest of the series, but those 90 minutes are perfect. The poster for Rocky IV is displayed proudly in my bedroom, and every now and then I look at it in all its majesty with Rocky sticking his glove up in the air while draped in the stars and stripes. I feel the Rocky movies had the ideal lifespan for a movie franchise; start off serious, goof out for some fun, but then end again on a serious note.

There’s no question about it, Rocky IV is the most 80’s movie ever. Case in point:

-It’s a sequel of a long-running franchise.

-Full of cheesy/corny quotable lines (“If he dies, he dies”, “Whatever he hits, he destroys”).

Stallone’s inspiration for Rocky IV came from the two fights between Joe Louis and Max Schmeling in 1936 and 1938 respectively; two fights which embodied the political and social conflict of the time – an African American taking on a supposed representation of Aryan superiority. Thus in Rocky IV we get Ivan Drago, the terrifying Aryan superman Rocky must challenge to avenge the death of his friend (could that sound more 80’s?).  Ivan Drago is a terminator; the strongest opponent humanly possible; however is Drago an interesting villain? I say yes; one of my favourite screen villains of all time as a matter of fact. In a memorable Siskel & Ebert moment, Roger Ebert described Drago as a “moderately interesting villain” but complained “how come he never has a single scene alone with his wife” and “why does she have nine times more dialogue than he has?”. Drago doesn’t speak for himself as there is no individualism in communism. I feel Dolph Lundgren gives a great physical performance, playing a character who is the opposite of Clubber Lang in that he speaks few words; succeeding in being an intimidating monster with his physical presence alone. I also love Drago’s reaction to Apollo’s entrance at the exhibition fight; that of a Soviet being welcomed to America.

Ivan Drago is a product of a state that sponsors his training as exemplified in the movie’s two training montages. Drago’s music theme is cold, intimidating and mechanical, just like his training. He is given steroids by his trainers and at a press conference an American reporter says “There have been rumors of blood doping and widespread distribution of anabolic steroids in the Soviet Union”; feels like an eerie foreshadowing to the state-operated Russian doping scandal of 2016. Following the boycotts at the 1980 and 1984 Olympics, Rocky IV couldn’t have come at a better time when sports and politics were going hand in hand. Drago’s fit of rage near the end of the fight in which he proclaims “I fight to win. For me! For me!”, is clearly a jab at communism as he wants to work for himself and not for the glory of the country. Likewise, when he lifts up and throws the Russian official who criticises him, it’s a classic Frankenstein moment; the monster turning on its creator.

Apollo Creed’s entrance, on the other hand, is one of the most capitalistic things ever put on film, with James Brown singing Living In America among Belly Dancers and Creed himself dressed in stars and stripes; and to top it all off, it’s in Las Vegas. A stark contrast to the Russians who open the Rocky-Drago fight later in the movie to their national anthem (yet another awe-inspiring musical highlight in the film). Did Apollo’s ego untimely kill him? Apollo’s patriotic egotism clouded his better judgment and no idea just how strong Drago would be. The sheer power of Drago’s punches during the fight with Creed (if you could even call it that) are exemplified by the sound effects. Also, why does Drago receive no punishment for throwing the referee aside, but if I was going to point out every little thing in this movie which makes no sense I’d be here all day. There’s such brutality to Creed’s death; pure slow motion brutality. I’ll never forget my mum’s reaction the first time I watched Rocky IV, a gasping “oh my God!”.

If there is one word associated with Rocky IV, its montage. I can watch these montages over and over again and still be enthralled by them. The first training montage is heavy on its symbolism of nature vs. machine and showcases the beauty of the Russian wilderness. Ok, it’s actually Wyoming but I can buy into it being a vast frozen expanse of the Soviet Union. But it’s training montage number 2 which has to be my favourite training montage in film history. This is partly due to John Cafferty’s Hearts On Fire – a motivating, pumping anthem if there ever was one (that synth, God I love it!) In the spirit of everything in Rocky IV being larger than life, instead of running up the steps of the Philadelphia Museum of Art, the montage ends with Rocky climbing a mountain.

The editing of Rocky IV also contributes to the film’s bombastic nature. The transitional shots of magazine covers and newspaper articles make the film play out like more of a comic book than it already is. Likewise, shots such as that of Rocky’s Russian chaperone looking into binoculars gets repeated three times within a few seconds but zoomed in further each time and edited to the rhythm of the score; it’s just so cool. On the other hand, I even recall a review I heard for Star Wars: The Forces Awakens refer the final shot of that movie as a Rocky IV shot, in reference to the aerial shot of Rocky on top of the mountain. Is Rocky IV a more influential film than the history books let on?

Rocky IV is incredibly distant from the first movie but this is appropriate as Rocky is out of his element and in a foreign land. This is the only film in the series not to take place in Philadelphia unless you include the scene in the Balboa mansion although it’s never made clear where the mansion is located. The No Easy Way Out montage is comprised of clips from the first movie, so the film allows you to bask in the stark contrast between the movies; a man who used to be a not very intelligent nobody and made money from prizefighting and working for a loan shark is now at the center of international politics.

Even the sheer predictably of Rocky IV is wonderful, such as when Adrian shows up in Russia to support Rocky; it’s all cliché but in the best sense of the word. The build-up to the final fight and the atmosphere is so immense; there could never be a Rocky film more epic than this. By this point, I’m actually scared for Rocky and fearful for his life, and Paulie’s emotional outpour before the fight, it gets me every time. I don’t care what anyone says, this is the greatest fight in film history. Rules don’t apply and Rocky somehow lasts the 15 rounds and even wins over the crowd (“Suddenly Moscow is pro-Rocky!”). This isn’t just Rocky against another opponent, this is Rocky against a superhuman, a hostile crowd, a Mikhail Gorbachev lookalike and an entire world superpower. Keep your superhero movies with their city-destroying battles; this is what I call a duel! Rocky’s final speech is naive in the most wonderful way. The words of the speech are so juvenile, yet when I hear Stallone utter them in the movie; it brings a tear to my eye. Did Rocky IV really help end the cold war? Who knows? Oh, and the end credits provide us with yet another awesome montage!

Rocky IV embodies the essence of capitalism the American Dream; if you work hard, success is attainable. I know many would just look at the movie and scoff at it as a simplified look at the Cold War with an “us and them” mentality. But as a piece of propaganda does it work? Oh, you bet it does. Rocky IV, I salute you to your over the top, cheesy 80’s perfection.

A Different Kind of Stockholm Syndrome

The Prize is my second favourite Hitchcock film he didn’t direct (my favourite being 1941’s All Through the Night). It’s not instantly engaging from the start as there is a lot of setting up to do but becomes more and more tense as the film progresses. In classic Hitchcock fashion, once the mystery kicks in your left scratching your head wondering if the protagonist just paranoid or is something fishy really going on.

I consider The Prize one of Paul Newman’s best films, giving him the opportunity to show off his not often exposed comedic chops. Newman is one of few select actors in which I can ask the question, “honestly, who doesn’t like Paul Newman?”; does there exist a more likable screen presence?  Likewise, Edward G. Robinson’s role is reminiscent of his part in The Whole Town’s Talking, playing a dual role of characters identical in appearance but with polar opposite personalities; while the hotel setting rings a bell of MGM’s own Grand Hotel some 31 years prior. plus when you set your movie in Sweden it seems inevitable that someone will mention Greta Garbo along the way. Hitchcock himself also never fully took advantage of the cold war. Torn Curtain, although I do think is underrated, is imperfect while Topaz is one of his dullest outings. It’s satisfying to see a superb Hitchcockian thriller with a plot about West vs. East.

North By Northwest has the auction scene in which Cary Grant makes a fool of himself to get caught by the police in order to get away from the bad guys; The Prize has the same scene but ups the ante with having it taking place during a nudist meeting and of course naturally of all the countries in the world to a nudist meeting, where else but Sweden. The Prize is not quite Hitchcock’s greatest hits but it’s the closet a film comes to being so. There are other allusions to other Hitchcock films including The Lady Vanishes, Foreign Correspondent, Saboteur, and Torn Curtain. Hang on, that one didn’t come until three years after this movie. Huh, was Hitchcock inspired by this Hitchcock clone/rip-off/ homage/whatever you want to call it. As far as imitations of someone else’s work goes it doesn’t get pulled off any better than this.