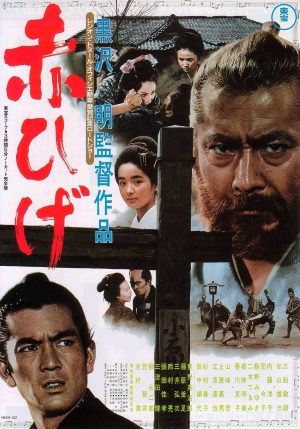 Films about medicine do hold a particular interest to me as they often make for great vehicles which to explore the human condition. Akira Kurosawa’s Red Beard, although set towards the end of Japan’s Edo period in the mid-19th century, presents no historical or geographical disconnect as the themes present are so universal. Red Beard is the final film of what I call the Kurosawa medical trilogy after Drunken Angel and The Quiet Duel but more significantly would be the final picture in the 16-film collaboration between Toshiro Mifune and Kurosawa, bringing to end Kurosawa’s greatest period.

The ambitious production shows Kurosawa at the height of his powers, and if the behind the scenes stories are to be believed, it would appear the great filmmaker was bordering on megalomania. For one it would appear Kurosawa employed the Erich Von Stroheim method of having things on set which never actually appear on camera. According to IMDB, drawers on set were filled with medical supplies from the time period even though they are never seen in the film as do whole alleyways and side streets of the picture’s main set. However, the results of this can’t be argued with as the film which came out on the other end has sets and attention to detail which are a marvel to behold, while the 3 hour run time never drags with the episodic nature of the picture working a treat and never comes off as disjointed. More infamously the production of Red Beard caused a rift between Kurosawa and Mifune and while one can only wonder about what future films the duo could have gone on to make, Red Beard is as fine as swan song as one can go out on.

Toshiro Mifune was never better in the role of Dr. Kyojō Niide, aka Red Beard (although with the movie being black & white we never see the red in this glorious beard of his). There is a weight and a larger than life dominance that Mifune brings that is key to the role. He looks so impressive, imposing, dominant, rigid, and wild that it forces the viewer to confront his combination of humanitarianism and toughness. The nature of the material in Red Beard puts the movie at risk of falling into the cheesy, but Mifune in part prevents this from being the case. I find Red Beard’s personality doesn’t match the negative terms he is described by from an intern at the beginning of the film with phrases including stubborn, inconsiderate, drastic, proud as-well-as a dictator. Especially considering the manner in which his new intern Dr. Noboru Yasumoto doesn’t play ball at first, the world-weary mentor remains remarkably calm and patient. Red Beard is a character who shows how being tough, hardheaded and willful (even deceitful) is sometimes necessary to get humanitarian work done. The film even provides Mifune with a slice of action which would normally be reserved for Kurosawa’s samurai films as Red Beard takes on a group of men at a brothel in order to rescue a sick girl. With ease (albeit believably) he takes out each man one by one, breaking many an arm and leg in the process. Being a doctor however, he immediately disowns his actions. Still, badass Toshiro is badass.

Red Beard runs (or rules some might say) a non-profit, government-funded health facility run known as the Koshikawa Clinic. On a technical note, why is the facility classified as a clinic as opposed to a hospital since it is a rather large venue, running round-the-clock complete with wards full of patients staying overnight? – But I digress. One fascinating aspect of the clinic is the lack of consistency when it comes to sanitary standards as viewed from a modern perspective. In by far the most graphic scene in the film (or any Kurosawa film for that matter), a woman is being operated on while conscious, being tied to the operating table and blindfolded, yet the men operating on her wear no gloves or face coverings. However, conversely earlier in the film it is clearly pointed out that the clinic does not allow tatami mats as they gather dirt and moisture. Furthermore, in one scene Red Beard speaks of the issue of poverty stating “But for poverty, half these people wouldn’t be ill”, however his comments on the situation in relation to politics are rather simplistic (“If poverty’s a political problem, what has politics ever done for the poor?”, “Has a law been passed to abolish poverty and ignorance?”). Granted Red Beard is set in the mid-19th century, so one can forgive his naivety in thinking governments can solve such problems as the 20th century would show.

Dr. Noboru Yasumoto (Yūzō Kayama) is a post-graduate medical student who has been assigned to the Koshikawa Clinic against his will. The prima donna has studied to become the Shogun’s personal doctor rather than working in some down-and-out clinic, thus during his initial stay, he lounges and refuses to do any work in hopes Red Beard will just tell him to leave. However, he comes to learn just how much of a doctor he really is by a series of incidents. In one scene he is left shaken after being instructed to stay by a dying man’s side and right afterwards faints after witnessing the sight of intestines being shoved back into a woman during a surgery. Its clear Dr. Yasumoto is book smart but not street smart, however more significantly, he has become a doctor for the prestige rather than out of humanitarianism, displaying selfishness in a job that is supposed to be as selfless as possible. His eventual choice of staying with the clinic rather than becoming the Shogun’s doctor is one of many aspects which would have made Red Beard a corny film in lesser hands.

If there’s one cinematic image from Red Beard to be burned into your memory it’s that of the mentally ill girl known as The Mantis (Kyōko Kagawa) and her haunting encounter with Dr. Yasumoto after she escapes from her quarters. In another display of Dr. Yasumoto’s naivety and inexperience, she delivers a harrowing monologue in which she claims she is not mentally ill and having been sexually abused by various men in the past. Dr. Yasumoto gets suckered in by this projected innocence and vulnerability despite him previously being told that she has killed 3 clerks with a hairpin. Perhaps one could cut Dr. Yasumoto some slack for falling under the spell of The Mantis as she doesn’t meet the stereotype of a mentally ill person – she is young, beautiful, seductive and still manages to dress like a maiko. However, this perception is undone as the look on her face turns to that of pure menace and she tries to stab Dr. Yasumoto with a hairpin while being sexually aroused at the same time (“The female eats the male after mating”).What’s so visually striking about the scene is the lighting and shadows created by a single candle while the sequence contains within it an unbroken shot that lasts 6 minutes and 10 seconds. The other great subplot within Red Beard is a 17-minute detour in which a dying man named Sahachi (Tsutomu Yamazaki) tells the story of how his wife’s remains came to be buried outside his house. The romantic and haunting tragedy is very much a Japanese one, with love being interrupted by an earthquake and concluding with the wife committing harakiri. This detour has no real impact on the rest of the film but to remove it would be such a loss to the film.

Red Beard represents the triumph of the human spirit as we watch the stress and the strain put under the workers of the clinic. Above all, Red Beard is one of the best cinematic representations of the golden rule – “treat others as you want to be treated”, which is best exemplified through the character of Otoyo (Terumi Niki). After the 12-year-old girl is rescued from a brothel after years of abuse, Dr. Yasumoto treats her with kindness and dignity which she has never experience before. After Dr. Yasumoto himself falls ill, she returns the favour and nurtures him back to health. Likewise, in one scene the Madame of the brothel (played by the always fabulous Haruko Sugimura) comes to the clinic to take Otoyo back to the brothel, the other women employed at the clinic prevent the Madame from doing so in a heartwarming moment of defiance in which they show how Otoyo has become one of the group. However, more significantly is the relationship Otoyo shares with the young boy Chôji (Yoshitaka Zushi), a thief who has been stealing gruel from the clinic. Rather than just chastising him for his thievery, through mutual understanding Otoyo manages to convince Chôji to stop stealing food in one of the film’s most wholesome and moving lengthy exchanges of dialogue.

I re-watched Red Beard on a windy day in which it was bucketing rain, and honestly, it just matched the atmosphere of the film perfectly. Red Beard is a very meditative, calm and tranquil film to watch (let me ask has snow ever looked more beautiful on celluloid?). Within all the human suffering, poverty, abuse and death, there still comes a film in which the three transcendental shine through – Goodness, Truth & Beauty.