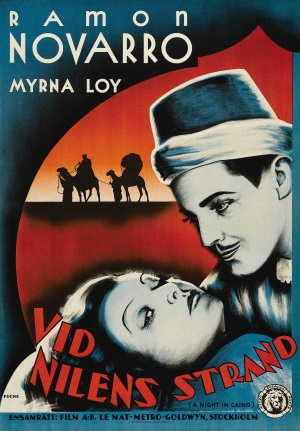 The Barbarian has to be seen to be believed. That’s if you’re able to believe this unbelievably ridiculous plot. Ramon Navarro’s Jamil is the textbook definition of a creep and why the characters in the movie take as long as they do to realise this is beyond me. Throughout much of the film, he treats the Myrna Loy’s Diana like dirt. He kidnaps her, drags her into the desert, has her whipped by another man so he can pretend to save her and on top of that, or at least what’s implied, he rapes her. Throughout The Barbarian I was thinking there’s no way these two are getting together at the end of the film but with only five minutes run time left to go, Diana ditches her nice loving fiancé for the man who earlier in the film kidnapped her and made her life a living hell. Why?! Stockholm syndrome, abused wife syndrome, girls just love a bad boy syndrome?

The final scene of the movie shows the two in a loving embrace on a barge under the moonlight, implying that his ending is supposed to be happy. Uh no, this is dark and disturbing. This woman is with a man who is the most morally dubious character being presented as the hero of the story I’ve ever seen. Is it supposed to be ironic or just horribly misguided? The Barbarian, however, is a rare instance of a movie which I feel kind of bad for having enjoyed, like I have to have the TV facing the wall in the corner of a room with the volume lowered, not letting anyone knowing I’m watching such a thing; or at least that was the case until I decided to post a review on the internet.

So what makes this movie enjoyable? For starters, there is the unmitigated joy that comes from watching politically incorrect pre-code movies. I’ve seen some crazy pre-code films but this just takes the cake.  It’s like a train wreck, it’s so shocking but you can’t look away. Moments of The Barbarian are shocking, other times it’s unintentionally funny, yet despite this bizarre mishmash, the film works. It’s engaging and there’s tension throughout, the sets and locations are superb, feeling like a tourist brochure at its exotic interiors and landscapes and there’s Myrna Loy’s bathtub scene, a moment of astounding risqué beauty and one of the sexiest scenes in all of cinema. Loy actually shows a lot of skin throughout the film in a range of skimpy attire. This is also the only movie I’ve seen to date which shows that the Pyramids of Giza are right beside the city of Cairo and not in the middle of nowhere – Who knew! Watch and observe The Barbarian in all its unbelievable pre-code glory.