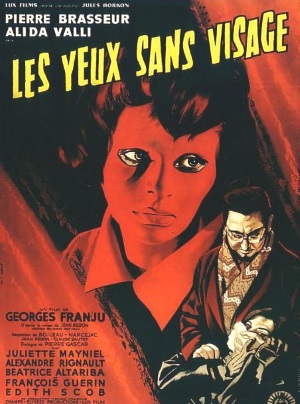 Eyes Without  A Face is the type of horror film which earns more respect than your average film of the genre, thanks in part to its class and sophistication. It’s essentially a glorified B-movie but one which turns archetypes found in the mad scientist genre on its head. After all, horror stereotypes are not actually scary; normal people acting in an abnormal way is what’s truly frightening.

Doctor Genessier (Pierre Brasseur) has the look of a potential madman even resembling the maniac John Barrymore yet remains subdue throughout the film as a man wrestling with his conscience. His assistant isn’t a hunchback but rather a manipulative woman Louise (Alida Valli) who kidnaps young girls of the doctor’s behalf; much like in William Wyler’s The Collector, in which victims can be so easily kidnapped and taken to a secluded house without a trace. Without the creepy carnival-like music she would appear a different character – not so manipulative and eerie; ah the power of editing.

Eyes Without a Face presents by far the best combination I’ve ever seen of a movie which is unsettling yet beautiful at the same time; the two keywords which sum up the viewing experience. I’m not a massively squeamish person yet the thought of plastic surgery makes my body muscles tighten. Watching any scene with the facially disfigured Christiane (Edith Scob) makes me feel uneasy but simultaneously enraptured at the same time creating a unique combination of viewer emotion. Even with the absence of a woman’s most important physical asset, Edith Scob is the pinnacle of femininity in Eyes Without a Face. The manner in which she walks and moves in that white coat-like dress couldn’t be more angelic and I haven’t even mentioned the mask.  If there is ever a cinematic image more implanted into one’s mind, it’s Edith Scob wearing that mask. It’s creepy, it’s unsettling, it’s emotionless, yet it’s one of the most beautiful things I’ve ever seen more so than most flesh and blood faces. The masks used in the film were moulded to fit Edith Scob’s own face, could that be the contributing factor to its beauty? Or is it the angelic figure which carries the mask, whose surrogate mother still brushes her hair despite the disfigurement.

Equally as eerie and hauntingly beautiful is the only scene in which Christiane appears without the mask. Out of context, it wouldn’t entirely seem this way but the very idea that this face has been transplanted onto her from another girl is so uncanny to watch. This is also helped in part of Scob’s stunning piece of facial acting in which the Christiane is not yet used to her new face with the limited, almost robotic like display of facial movements.

My only issue with Eyes Without  Face are two plot contrivances. At the beginning of the film when Dr Genessier identifies the remains of a recovered body as those of his missing daughter, the authorities at the morgue don’t even bother asking the other man they asked to come along to look at the remains to view the body for himself. Likewise, when the character of Paulette goes missing after leaving the hospital to investigate Dr Genessier on their behalf, the police don’t follow up on her disappearance. Are these plot contrivances for the connivance of the plot or did the filmmakers deliberately set out to portray the authorities as being that incompetent?

Regardless, such plot contrivances are only a minor annoyance in a movie with such startling scenes, imagery and set design from the painting of Christiane’s mother to Dr Genessier’s chamber. I’ve long felt that a medical or laboratory-like aesthetic is one of the most effective surroundings to capture in glorious black and white. This beauty culminates in the film’s ending in which Christiane performs a simple undoing of everything her father has been working on. This is not a Charles Foster Kane style destruction of a room but rather she gracefully stabs her surrogate mother and symbolically sets dogs and birds used for Genessier’s experiments free. Aside from the doctor getting mauled by the dogs, the ending is intense yet peaceful. Some films stick with you more than others: Eyes Without a Face is one of those which I found myself thinking about its visual images for days after seeing and they won’t be leaving me soon.

The Fountain of Youth

Richard Burton hated this movie, calling it a “f***ing bloody, lousy, nothing film”: I must strongly disagree. Ash Wednesday paints a haunting picture of a plastic surgery hospital, with patients walking around like zombies with bandages over their heads in a last desperate bid to be young again. As Keith Baxter’s character puts it “we all simply refuse to accept reality”. One moment during the film is in which a group of patients are playing cards; reminds me of the ‘waxworks’ scene from Sunset Boulevard. Realistic or not, this whole section of the movie is eerie and effective. Even after Elizabeth Taylor has left the hospital there is this continuing sense of unease, as if she has just sold her soul to the devil; helped in part by Maurice Jarre’s music score. The movie’s theme of fading beauty is made all the more poignant since its Elizabeth Taylor of all people doing the role.

The first act of Ash Wednesday features graphic scenes of plastic surgery. Watching the film I didn’t know if they were real or just really convincing special effects. Nope, it turns out it is real footage with skin being cut open and plenty of exposed flesh in close up detail. I do wonder who is actually under the knife in this footage but it is an effectively put together sequence in which I believed Elizabeth Taylor’s character was the one undertaking plastic surgery.

The opening credits of the film feature a series of cut and paste photographs of Elizabeth Taylor and Henry Fonda in an effort to make it appear they have been a married couple as they age over the years. Fonda being much older than Taylor in real life, these series of photos feature the two at the same age periods, so a photo of Fonda in the 30’s will be cut and paste with a picture of Taylor from the 50’s. It’s not entirely convincing but is neat to look at.

What I appreciate most about Ash Wednesday is just honest the storytelling is. Taylor’s husband played by Henry Fonda simply doesn’t love her anymore, there is no sexual attraction between the two them and they don’t satisfy each other’s needs anymore; yet he doesn’t come off as a jerk getting these points across. Untimely the two learn to accept this but not without having an understanding of each other and move on with their lives.

Ash Wednesday has yet to ever see the light of day on DVD, remaining VHS only.