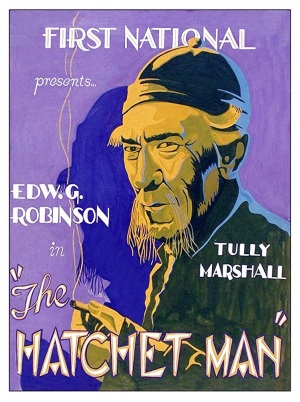 The Chinese: A Great Bunch Of Lads

In the beginning of The Hatchet Man, the Chinese community (“Yellow residents” as the opening crawl refers to them as) in San Francisco circa 1918 are a parallel society to the rest of America. However, fast forward to 1932 and the community has moved beyond the Tong wars of the past to a more Americanized and western way of life in which many of the old ways are dismissed such as foot binding and women having less freedom. – Meanwhile, elders in the community hold onto their more old fashioned ways. Instead, we see a community which is becoming integrated into wider society and there are even signs of interracial relationships with mixed couples seen in the dance hall sequence in one of the more insightful films about the oriental to come from this era.

The Hatchet Man is another pre-code William Wellman gem in which the production values, extensive camerawork, and detail in the sets are second to none. The graphic ending is one of the best in pre-code cinema but the scene which I feel best shows of the craftsmanship present in The Hatchet Man is that early in the film in which Wong (Edward G. Robinson) has to kill his best friend and blood brother Sun Yat Ming (J Carroll Nash). At the beginning of this lengthy and slow-paced scene, Sun is finishing writing a will to Wong under the fear that he will be killed by a Tong (“The one I am expecting comes through doors without knocking”). Sun is leaving Wong all his worldly goods and his daughter to become his wife when she is of legal age. Soon Wong arrives and after many gaps in the slowly delivered dialogue with calming Chinese music in the background, the camera does an epic zoom on Robinson as he delivers the fatal line “I am the hatchet man of the Lem-Sing Tong”.

The one drawback of The Hatchet Man is the casting of Edward G Robinson; he isn’t fully convincing in the role of Wong Low Get. Sometimes he looks Asian which his epicanthic fold but not always, not to mention he doesn’t sound particularly Asian which his Eastern European accent. That said if you can suspend your disbelief at Robinson playing an oriental, you’re still left with a performance with the intensity you would expect from Robinson. Otherwise, it’s hard to tell in the cast who is Asian and who is a white actor in makeup. Loretta Young is far more convincing in her role as Wong’s adopted daughter Sun Toya San. Wong’s romantic relationship with his adopted daughter raises many eyebrows from today’s standards not is it ever made clear if she knows this is the man who killed her own father, but this just makes the odd relationship all the more fascinating. Leslie Fenton, on the other hand, is the film’s big scene-stealer as the slim ball villain Harry while Toshia Mori (who was originally to play Loretta Young’s role) as Wong’s secretary is a very striking screen presence. 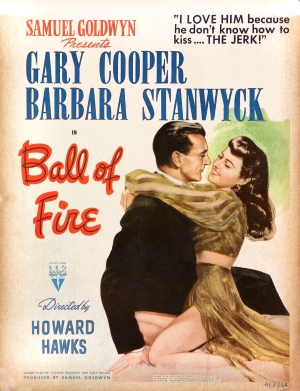 The Kind of Woman Who Makes Entire Civilisations Topple

Ball of Fire is the more grown up, risqué version of Snow White and the Seven Dwarfs; even during the opening scene the film’s cast of professors are seen walking in tandem through Central Park like the seven dwarfs as they adhere to a strict daily seclude in an attempt to compile an encyclopaedia of all human knowledge. The film plays off the public perception of bureaucrats, bankers, librarians and people in other such mundane professions. Are they such sheltered, socially awkward individuals who are in bed at 9 every night and have likely never been in a relationship? The recurring Howard Hawks’ theme of male bonding is ever present in Ball of Fire, although here it is all the more goofy with a cast of characters playing nerds. Regardless there still remains one very poignant scene in which Professor Oddly (the only bachelor of the group) recounts about his past wife and the men start singing.

There are few other character entrances in film more entertaining than that of Barbara Stanwyck as Sugarpuss O’Shea (a not so innocent name by today’s standard) as she enters the picture singing and dancing with Gene Krupa and his orchestra – could the character’s fast-living personality be summed up in a more entertaining manner? Likewise, that dress! No wonder Edith Head had decades working in the industry. Notice it’s nonstop sparkling every moment it’s on screen, making Stanwyck look all the more tantalising. Almost all the outfits worn by Stanwyck in Ball of Fire are clearly designed to make her look as sexually appealing as possible. When Professor “Potsy” Potts (Gary Cooper) and Sugarpuss are alone, the sexual sparks fly and when she holds up a leg she gives a group of socially awkward, sheltered middle-aged to old men a sexual awakening. It’s all the more poignant that the man she seduces is played a Gary Cooper; a contrast to his boy scouty screen image. Here Cooper is a nerd, and while he did play tough guys on screen, he will always be that boy next door. Ball of Fire is full of lines and moments which wouldn’t feel out of place in a film made before the production code. At the beginning of the film, we even see Professor Potts arousing the funder of the encyclopaedia project by merely talking to her in an attempt to convince her to keep the project running.

Ball of Fire is worth watching multiple times for all the lines you can easily miss out on. For example, when a garbage man (Allen Jenkins) comes into the house to ask the men for assistance on radio quiz, one of the questions regards the correct way to state a mathematical problem: “2 and 2 is 5, 2 and 2 are 5, 2 or 2 makes 5”. Cooper states the correct answer is “2 and 2 are 5” however the mathematician of the group then states “2 and 2 are 4” followed by the garbage man responding, “that’s a good one, nobody’s gonna get that”. Am I detecting a sneaky Orwellian statement pre-1984?